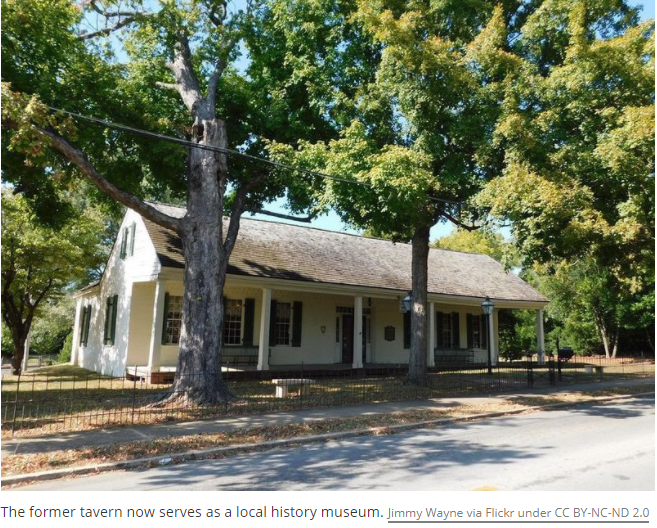 Archaeologists in northwest Alabama have unearthed pottery, glass and nails at the site of an inn and tavern that played a pivotal role in the Civil War. Some of the artifacts predate construction of Pope’s Tavern in the 1830s; others are even older, predating Alabama’s admission as the nation’s 22nd state in 1819, reports Connor Todd for Alabama Public Radio (APR).

The team, from the University of Alabama’s Office of Archaeological Research, conducted the excavation on the grounds of what’s now Pope’s Tavern Museum, a local history museum in the city of Florence.

“They pulled out a bunch of artifacts that are being cleaned and processed right now,” museum curator Brian Murphy tells the Times Daily’s Bernie Delinski. “They will give us a really good image of the types of materials and type of utensils used, and really a glimpse into the daily life of the people who lived there and used that space.”

As the museum notes on Facebook, the work was funded by a Historic Sites Grant from the Alabama Historical Commission. Among the artifacts found during the dig were a glazed ceramic vessel and window glass.

According to APR, the tavern stood on a road that was constructed in 1816, at the order of future president Andrew Jackson, to connect Nashville and New Orleans. The building served as a stagecoach stop and inn.

During the Civil War, Union and Confederate forces occupied Florence at different times. Both sides used Pope’s Tavern as a hospital and command center, notes Florence-Lauderdale Tourism on its website.

Today, the museum houses a number of Civil War artifacts, including a rare Kennedy long rifle and a Confederate colonel’s uniform. Staff are currently preparing for an exhibition exploring slavery and cotton in the Florence area. Among the topics set to be covered is the role enslaved workers played in constructing some of the area’s significant buildings, including Wesleyan Hall at what’s now the University of North Alabama.

Excavations at the site began with measurement of the yard in May. Then, technicians scanned the ground for anomalies and used the data to determine where to dig test pits. In addition to the pottery and other small items, archaeologists found the remains of a brick structure that may have been a hearth, privy or outbuilding, reports the Associated Press (AP). Murphy says they’re conducting a microscopic analysis of the building materials.

“After they do that, they’re going to get back to us with the larger picture of what it all means and what might be under there still that could be the source of a future excavation,” he tells the Times Daily.

The museum notes on Facebook that the research may be able to establish the earliest period of occupancy at the site.