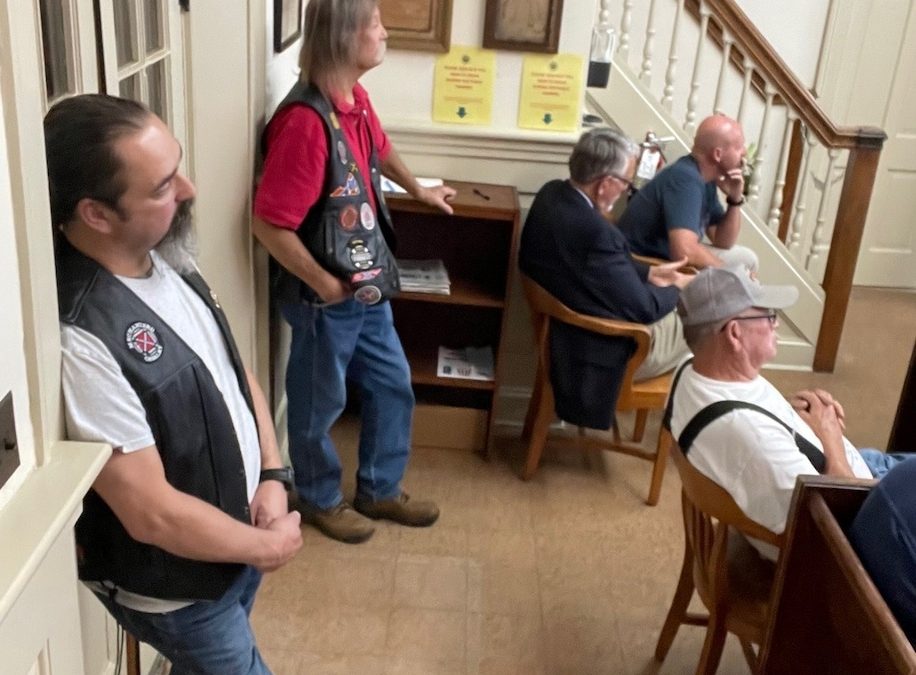 MATHEWS, Va. — Former county board member Jerry Sadler solemnly doffed his red “Make America Great Again” hat as he approached the microphone. “The Lord commanded us to love one another,” he began in a quiet voice. “I don’t hate anybody.”

“But I detest some people’s demeanor and ways,” he said, going on to label the NAACP a “racist organization” and condemn Black Lives Matter for trying to destroy cities. Some things need to change in this country, he said — just not in Mathews County.

And certainly not the Confederate statue standing just outside the door of the historic 1830 courthouse. For more than three hours Wednesday night, the Mathews County Board of Supervisors heard from local residents about a proposal to deed the land under the monument to a private heritage group that could preserve it in place for all time.
“I just think the monument would be in better hands with people that actually loved it and adored their ancestors. They could take care of it,” resident Matthew Houston told the board.

The issue Wednesday went far beyond a single statue. Residents — neighbors, families — plunged into an emotional discussion about identity and who gets to define it, provoking a heated defense of local heritage. Much of it was couched in an unreconstructed view of history in which the Lost Cause is noble, the Confederacy was a bastion of states’ rights and Gen. William Tecumseh Sherman was an unprincipled butcher.

Those who say otherwise “are racist toward us,” said Joey Taylor, commander of the local chapter of the Sons of Confederate Veterans, who have asked to take possession of the monument. “I’m just so tired of it I don’t know what to do … They’re bullying us, telling us we’re bad people. I don’t like that at all. I think we’re good people.”

The board took no action Wednesday but suggested that it will continue to pursue the possibility of deeding the statue to groups such as the SCV or United Daughters of the Confederacy.

“We’ll probably set an example for some other localities,” board chairman Paul Hudgins said near the end of the meeting. “This board is dealing with the problem because no other board wanted to deal with it … We’ll get this straight.”

Mathews has long been a secluded community of farmers and watermen — it’s not on the way to anyplace else, except by boat, its marshes and creeks prominent along the Chesapeake Bay above Gloucester and below the Rappahannock River.

The county of about 8,600 residents is 8 percent Black, and a referendum last year on the Confederate statue found 80 percent of voters in favor of leaving it in place. Increasingly, though, transplants from Richmond and the Hampton Roads region have arrived to snap up waterfront getaways. And with Confederate statues coming down across Virginia over the past two years, residents sense change on the way.

“All eyes are on Mathews. Why are they all on Mathews? Because we had the nerve to push back against what we don’t like,” Randall Dobson told the board. “Wake up. Show the rest of America that you can get some backbone and push back and say we’re not gonna knuckle under.”

The historic courthouse was filled to capacity Wednesday night — 80 people — with an overflow crowd outside watching on a TV screen. Only one Black person sat in the audience — local NAACP President Edith Turner — and one on the board: the Rev. Melissa Mason.

Local deputies and state troopers formed a heavy presence around the square, but there appeared to be no disturbances. A member of the SCV stood watch inside the courthouse door, politely letting speakers in and out.

Many people spoke against the general idea of deeding public property to private interests, though none called for the statue’s removal.

“I hate it that we’re here having this discussion tonight. I know many people I like and respect will not like what I say,” said Christine Ulrich. The statue honors the “bravery and self-sacrifice of individual people” who died in the Civil War, she said. But giving it to the SCV would allow them “to fly the flag of a government and a way of life defined and made possible by slavery.” 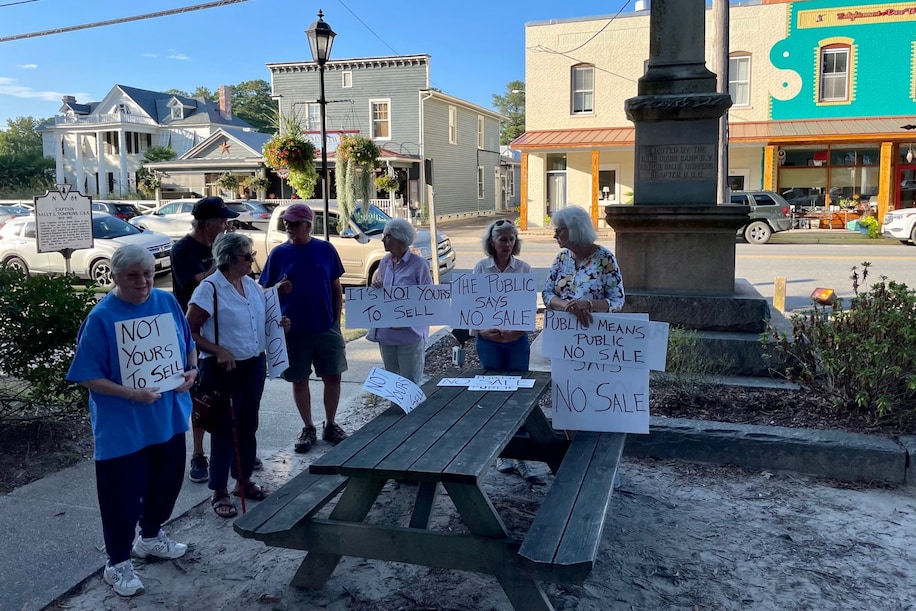 Sharon Dequaine pointed out that the monument was not erected right after the Civil War, but in 1912, when Black Americans in Virginia and across the South were being lynched and intimidated by the Ku Klux Klan. The statue “was a daily reminder of who holds power and who doesn’t,” she said.

One day, Dequaine said, future residents of Mathews County might not want to preserve the statue as it is. “Do we really want to preclude that choice?” she said. “This is not a matter of black and white, it is a matter of right and wrong.”

There is no threat to the monument, Shawn Jaeger said. “Honestly, if it wasn’t being pushed down everyone’s throats by a small group of people … there wouldn’t even be discussion about this anymore,” he said.

But after the public hearing was complete, board members Dave Jones and Mike Walls revealed what they said was an actual plot to destroy the statue.

In researching the monument’s ownership history, they said, they discovered in the records of the State Corporation Commission that local resident Dee Russell recently registered the name “the Mathews Monument Association.” That was the name of the original group that erected the statue a century ago, long since disbanded.

The two supervisors suggested Russell had done so to try to lay claim to the monument and tear it down.

“This was really disturbing,” Walls said. “This changed the game, folks.”

Citing that finding as well as a letter from the NAACP threatening legal action if the county deeds the property to a heritage group, Jones said the statue is, actually, under assault.

Russell stood and tried to explain, but Jones and Hudgins would not let her speak.

Reached Thursday morning, Russell laughed off the accusation. Her intent, she said, was to explore whether a diverse group of local residents — including a member of the SCV and the UDC — would want to band together to take care of the monument instead of awarding it outright to the SCV.

“It would be a less divisive group of people from all walks of life in Mathews, so it would be more palatable to everyone,” Russell said.

Hudgins, who had run the public hearing with patient good humor, said the “plot” was all the evidence anyone needed. Outsiders were trying to “cause some civil unrest” in Mathews and provoke “them bunch of ol’ hicks” on the board to do something rash.

Vowing that the monument “ain’t going nowhere,” Hudgins said the board would patiently go through the steps of permanently protecting it.

“We do not have a race problem in Mathews County,” he thundered in conclusion. “People, stop trying to create one.”

Through it all, Mason, the lone Black board member, had sat mostly silent. Now all turned to her for comment.

“Is it comfortable sitting here? For me? No, it’s not,” she said. She pleaded for the community to come together and grew emotional as she said she fears parts of the rural area are dying off as young people leave.

She asked if the statue could be better positioned as a memorial. “Is it too late for that? . . . We have an opportunity to show the world what collaboration, what getting along, truly looks like.”

As the meeting turned to other agenda items, Turner, the NAACP chief, rose and quietly walked out, never having spoken up.

“Welcome to Mathews,” she said, crossing the street. “They have a saying, ‘the Mathews way.’ That’s what you get.”