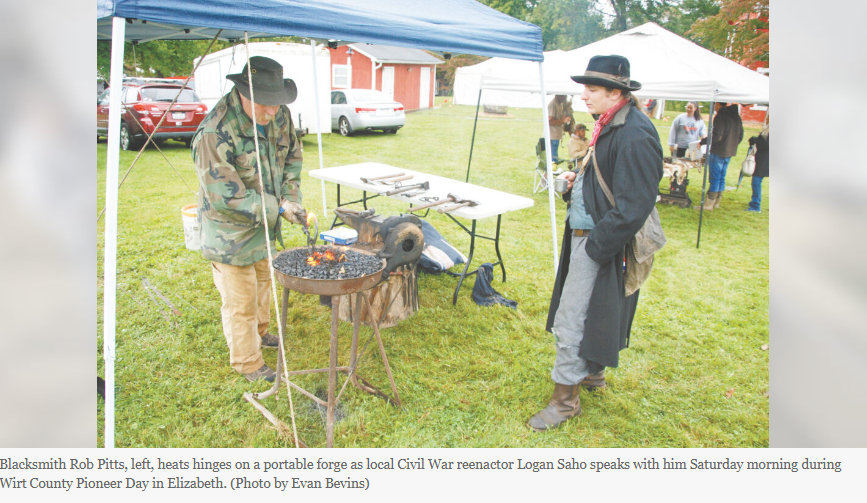 ELIZABETH, W.V. — Having an outdoor event at the beginning of October means the weather is a roll of the dice.

But even though the remnants of Hurricane Ian looked like a snake eyes for Wirt County Pioneer Day Saturday, vendors and residents still gathered around the courthouse in Elizabeth for some history, shopping and social interaction.

“We’ve been here when it’s been 90 degrees. We’ve been here … when it’s done this,” Elizabeth resident Rebecca Almashy said from the tent where her family offered a variety of items for sale under the banner of Almashy Crafts. “It’s just a good show. We enjoy being here. Everyone’s friendly.”

The cold, wet weather didn’t stop Palestine residents Becky Davis and Jesse Cole from bringing the kids out for the day.

“We’re from West Virginia. We live in all four seasons,” Cole said with a laugh.

Despite cold, rainy conditions, a number of vendors still set up for Wirt County Pioneer Day Saturday around the courthouse in Elizabeth. (Photo by Evan Bevins)

Pioneer Day is organized by the Daughters of the American Pioneers, and although event committee chairwoman Carole Menefee conceded Saturday might have had the worst weather in the event’s history, she was still excited.

“I’m always excited about it,” she said.

Some of the scheduled 70 vendors decided not to set up in light of the gloomy forecast, Menefee said. But in previous years where the crowds were smaller, vendors still did well, she said.

“The ones that are true pioneers, they come out and stick it out,” Menefee said.

Elizabeth resident Loraine Fought had a table and tent to display her photography and jewelry made from antique silverware.

Tyler County resident Pam Harkins demonstrates the use of a spinning wheel on the second floor of the Wirt County Courthouse Saturday. Harkins was one of multiple artists associated with Henderson Hall in Wood County who participated in the 19th annual Pioneer Day. (Photo by Evan Bevins)

“We’ve actually had a nice crowd,” said Fought, also a member of the Daughters of the American Pioneers. “This is a time we all get together as a community. … It’s like a reunion.”

It was easier for Elizabeth resident Rob Pitts to keep warm than many on Saturday as he heated and punched holes in a set of hinges made from horseshoes on a portable forge and blower. A blacksmith on the side, Pitts said he sets up at Pioneer Day almost every year.

“I just like getting out and visiting with people,” he said. “I used to always run into some old-timers who would tell me about blacksmiths around here when they were younger.”

Wirt County resident Logan Saho was decked out for the afternoon’s planned Civil War reenactment skirmish, a prelude to the larger battle slated for Sunday. He said he enjoys attending Pioneer Day because of “the smell of burning coal, the sound of the cannons roaring and the family and the people.”

The Daughters of the American Pioneers opened up the Beauchamp-Newman Museum, focused on local history, for people to walk through during the event. Quilts were hung on the first floor of the courthouse, with spinning wheel demonstrations on the second and pumpkins decorated by children and adults displayed out front.

Almashy Crafts was among the vendors who participated in Wirt County Pioneer Day Saturday in Elizabeth. (Photo by Evan Bevins)

Tents were not only set up to shield the vendors from the elements but the musical performers and audience as well.

Evan Bevins can be reached at ebevins@newsandsentinel.com.

Elizabeth resident Julia Starcher, right, tries on a ring made from antique silverware by Loraine Fought, left, from antique Saturday at Pioneer Day on the lawn of the Wirt County Courthouse. (Photo by Evan Bevins)

A pumpkin-decorating contest was part of the festivities for the 19th annual Wirt County Pioneer Day on Saturday. (Photo by Evan Bevins)

Akron resident Patty Sayre looks at the display of quilts on the first floor of the Wirt County Courthouse in Elizabeth Saturday during Pioneer Day. (Photo by Evan Bevins)