Old Times Here Are Not Forgotten 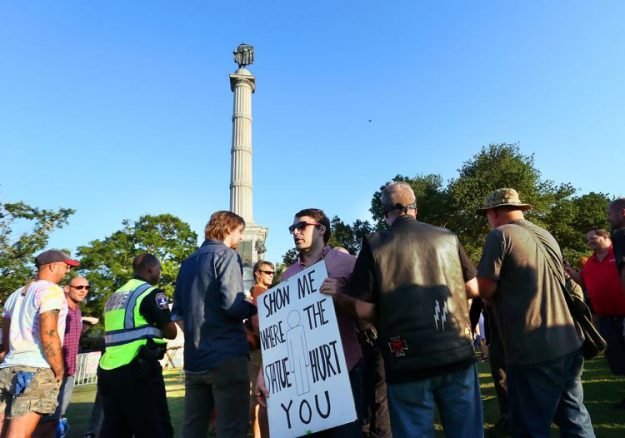 The Make It Right Campaign — part of a national movement to bring down Confederate-related monuments — gathered in Marion Square at the John C. Calhoun monument to sing and speak of racial disparity on Thursday, May 16, 2019. The crowd included some who defended the monument. Wade Spees/Staff

A man who applied to oversee South Carolina’s colleges and universities was recently grilled by state officials about his views on … the Confederacy.

A week earlier, the state’s senior congressman noted that Robert E. Lee was technically a “loser” after the president of the United States went out of his way to praise the Southern general.

That same week a group renewed calls to remove the John C. Calhoun monument in Charleston’s Marion Square because of his positions on, among other things, the “positive good” of slavery.

Now, Calhoun wasn’t a Confederate — he was long dead before secession — but some people consider him the Rebels’ encouraging grandpa.

So these are the headlines from the first three weeks of May 2019, a full 154 years after the end of said conflict. And that’s no surprise to longtime locals. After all, this is South Carolina, where the Civil War began … and one day might end.

Just don’t count on it.

We are still focused on, and divided over, our nation’s defining moment in part because a growing number of people are no longer willing to accept a long-standing, romanticized — and sanitized — version of history.

And that won’t change so long as there is a double standard.

In February, Fox News provocateur/panderer Tucker Carlson joked with a guest that people need to “get over slavery.” Because, you know, it happened a long time ago.

Which is the exact same thing some people say about efforts to topple the Calhoun monument.

But how can anyone forget the past when others continue to glorify a less-than-candid version of that history every day? It’s hypocritical at best, but the attitude comes naturally from more than a century of glossing over the ugliest parts of our history.

Earlier this month, the Commission on Higher Education questioned Oran Smith, a finalist for the regulatory agency’s top job, about his work for a neo-Confederate magazine. A magazine that, mind you, sold T-shirts celebrating the assassination of Abraham Lincoln in the days after terrorist Timothy McVeigh was arrested wearing that very shirt. So, fair question.

Now, Smith said the right things. He claimed his views — like those of many Southerners — were formed by a childhood surrounded by relatives involved in the United Daughters of the Confederacy and the Sons of Confederate Veterans.

Many people could legitimately say the same thing. The Civil War is an integral part of this nation’s past, and there are some people with a sincere interest in that dark chapter of American history. It happened here, after all.

It’s also complicated. Many of the men who fought and died for the South didn’t own slaves. They, too, were victims of politicians who stirred sectional pride as a smokescreen to defend an economic system of slavery that kept them rich.

Unfortunately, that part of history is often conveniently ignored and obscured by those who use the war for today’s political purposes.

And that’s the problem here.

The people who want some of these monuments gone are ratcheting up their efforts in the face of a stubbornness emboldened by suggestions that the racism of white nationalists is really just a Robert E. Lee fan club.

Which gave congressman Jim Clyburn the irresistible opportunity to point out the president normally doesn’t like “losers.”

Smith at least took a more modern view of all things Confederate. He told the Commission on Higher Education that his opinions changed after Dylann Roof killed nine people in Charleston’s Emanuel AME Church.

Following that, he called for removing the Confederate battle flag from Statehouse grounds. He realized that, no matter what the symbol, reminders of the war are always going to be painful for some people.

Good for him. More people need to realize that if we are ever going to stop living in the 19th century.

Smith ultimately didn’t get the job, perhaps because some folks weren’t completely sold on his change of heart. That’s just how it goes these days. The myths have endured a long time, and they don’t fade quickly. And many people are tired of being told to “get over” history by those who promote a facile version of it.

And so, a new generation has apparently adopted a phrase that used to be popular in Southern culture: