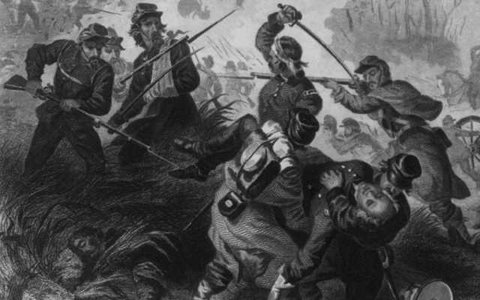 One of at least three Confederate chaplains from obscure DeSoto County, Miss., Owen started the American Civil War as a private with Company I (Pettus’ Rifles) in the 17th. That was on June 1, 1861, according to the DeSoto County Web site. By June 29, however, the Methodist minister had been named chaplain of the entire regiment. And once a chaplain, Owen “never felt it right that he should attempt to kill or wound a man, so he never fired another shot, yet he was seldom back of the actual line of battle,” wrote Major Robert Stiles in his postwar book Four Years Under Marse Robert.

Owen’s 17th Mississippi saw its share of notable engagements, too. The regiment’s battles began with Ball’s Bluff outside Leesburg, Va., on October 19, 1861, followed by the Seven Days’ battles outside Richmond in June 1862. The regiment then was absorbed into William Barksdale’s Brigade, and together “they were in many battles,” as also noted by Tim Harrison, assistant DeSoto County coordinator on the county Web site. At Fredericksburg, Va., moreover, “beginning in December 1862 a great religious revival broke out in Lee’s army [Army of Northern Virginia]. The same was true in Barksdale’s Brigade. Major Robert Stiles of Virginia gave credit for starting those religious meetings, at least in this brigade, to the Rev. William Owen, who was referred to as Brother William.”

Stiles obviously knew and admired Owen for his selfless and utterly fearless ministry as a chaplain. “Of all the men I ever knew,” wrote Stiles in his Marse Robert book, “I think he was the most consecrated, the most unselfish, and the most energetic, and that he accomplished more that was really worthy of grateful recognition and commendation than any other man I ever knew, of his ability.”

To explain what he meant about “ability,” Stiles added, “By this I do not mean to imply that his ability was small, but simply that I do not include in this statement a few men I have known, of extraordinary abilities and opportunities.” In any case, the same Brother William was “a man of the sweetest, loveliest spirit, but of the most unflinching courage as well.”

For Stiles, it wasn’t enough to say that Brother William was seldom to be found behind the lines during battle. “It may give some faint idea of his exalted Christian heroism to say that his regular habit was to take charge of the litter-bearers in battle, and first to see to the removal of the wounded, Federal as well as Confederate, when the former fell into our hands; and then to attend to the burial of the dead of both sides….”

By Harrison’s Web site account, the Mississippi chaplain took a more activist role when Barksdale’s Brigade faced a Union onslaught at Fredericksburg in May 1863, while Lee was busy at Chancellorsville about 20 miles away. Reacting quickly, “Brother William rode all the way to Chancellorsville on a horse without a saddle and reported this development to General Lee, himself, who then sent troops to correct the situation.”

At Gettysburg, Pa., just weeks later, General Barksdale was killed in his brigade’s attack on the Union-held Peach Orchard the second day of the battle, while the 17th Mississippi alone lost 40 men killed and counted 160 wounded. Chaplain Owen came through the maelstrom unscathed but stayed behind to tend the wounded when Lee’s battered army retreated to Virginia. For this, naturally, the Mississippian was taken prisoner.

Released in November 1863, Brother William just as naturally went back to war, his kind of care-taking war, with the 17th Mississippi. Thus he was present when Lee and Lt. Gen. Ulysses S. Grant collided in the Wilderness in May 1864, not far from Chancellorsville; he was on hand again for another ghastly collision of the Union and Rebel armies at nearby Spotsylvania just days after the Battle of the Wilderness.

This, though, was to be the Methodist minister’s last battle.

After one Union attack, wrote Major Stiles years later, “Brother William was, as usual, out in front of our works, utterly unconscious of his own heroism or his own peril. He had removed the wounded of both sides and taken note of our dead, and was making his memoranda of the Federal dead, when a Minié ball struck his left elbow, shattering it dreadfully.”

Soon removed to Richmond, the Rev. William Benton Owen was eventually sent all the way home to Mississippi. His comrades left behind had their hopes for his recovery.

“But no,” wrote Stiles, “he was never really a strong man; indeed he was one of the few small and slight men I remember in the entire brigade, and, besides, he was worn and wasted with his ceaseless labors. He never really rallied, but in a short time sank and passed away. Few servants of God and men as noble and consecrated, as useful and beloved, as William Owen have lived in this world or left it for Heaven.”

Additional note: DeSoto County’s two other chaplains in gray created memorable legacies of selfless, high-risk ministry of their own—and both also died in the line of duty.