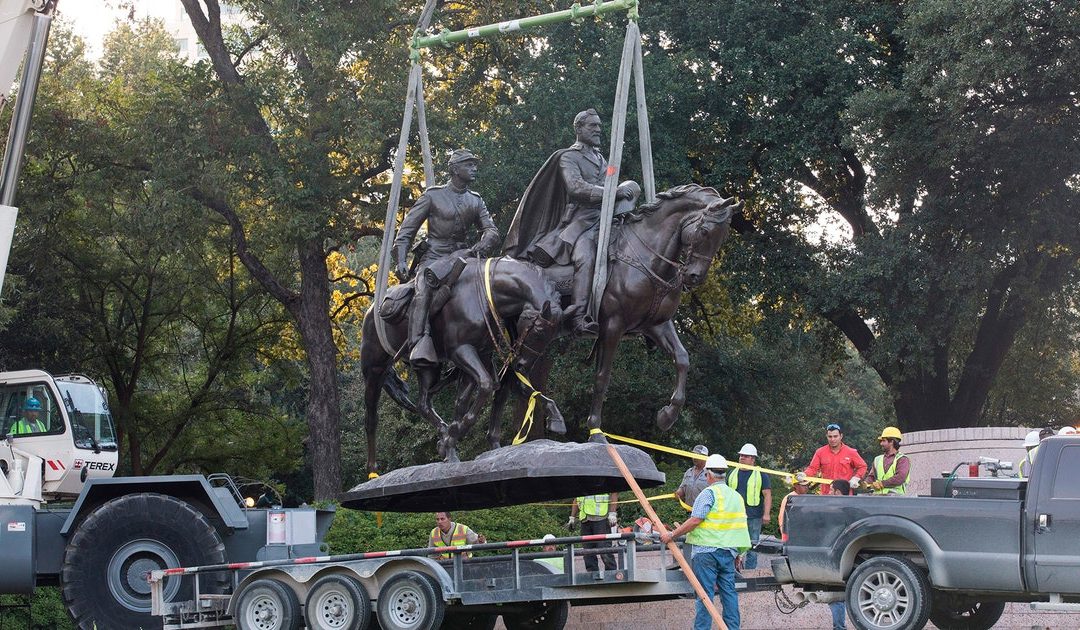 The campaigner against Confederate monuments who claimed to be descended from Robert E. Lee’s brother actually has no family ties to the Confederate general, according to a new investigation.

Rev. Robert W. Lee IV is actually descended from a family of Lees in Alabama who arrived in America separately from, and have no known ties to, Robert E. Lee’s Virginia dynasty, according to the top factchecker at the Washington Post.

Robert W. Lee, also known as Rob, had claimed to be the fourth great-nephew of Robert E. Lee in speeches, a book and a lawsuit seeking the removal of a Confederate monument in Iredell County, North Carolina.

n statements after the publication of the Post article, Rob Lee said he would withdraw as a plaintiff in the lawsuit, and apologized ‘for distraction and de-centering voices of color.’

‘If you feel this discredits me or breaks trust, I’m sorry,’ said Rob Lee, adding that he stands by his family lore and noting that ‘family dynamics are at play.” 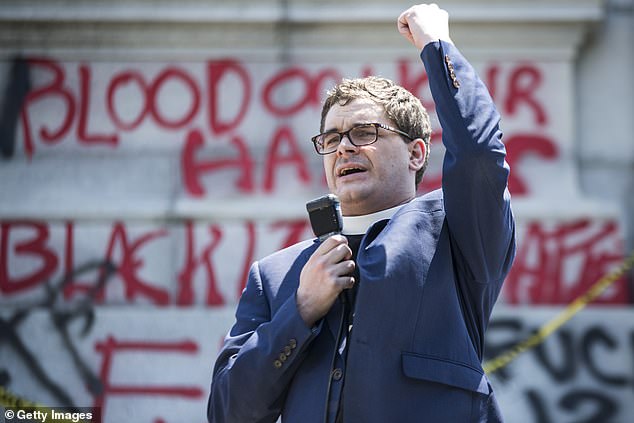 Rev. Robert W. Lee IV, also known as Rob, has claimed to be the fourth great-nephew of Confederate general Robert E. Lee, but records cast serious doubt on the claim 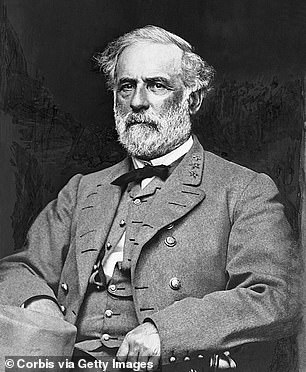 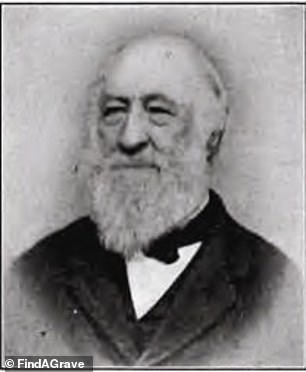 Rob Lee has said that he is related to Robert E. Lee (left) as a direct descendant of the Confederate general’s elder brother, Charles Carter Lee (right) 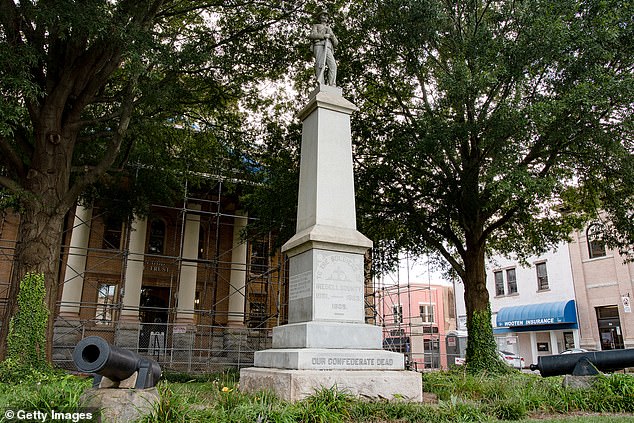 Since at least 2016, Rob Lee, a pastor in North Carolina, has touted his alleged family history in what many regard as a noble crusade, campaigning to have Confederate monuments removed from public spaces.

He appeared at the MTV Video Music Awards in 2017 declaring his support for Black Lives Matter, and last June appeared alongside Virginia Governor Ralph Northam to announce that a statue of Robert E. Lee would be removed from the state capital.

‘My uncle Robert E. Lee, so many greats removed of course,’ Rob Lee remarked as the governor stood by his side.

Rob Lee has also appeared on The View, NPR, and delivered a prayer at President Joe Biden’s virtual Inaugural Prayer Service on January 21.

He even reiterated his ancestry claims in columns in 2016 and last year for the Washington Post, which has now debunked them.

Rob Lee’s claim appears to rest on the assertion that he is a direct descendant of Lee’s older brother, Charles Carter Lee.

He wrote in his 2019 book that his family referred to Robert E. Lee as ‘Uncle Bob,’ telling how his grandmother kept a portrait of the Confederate general on the wall of her den.

He wrote that his ‘Nana’ kept a  ‘thick, leather-bound book’ with family records, and once pointed to the portrait of Robert E. Lee and said: ‘You are related to him, a nephew separated by many generations.’ 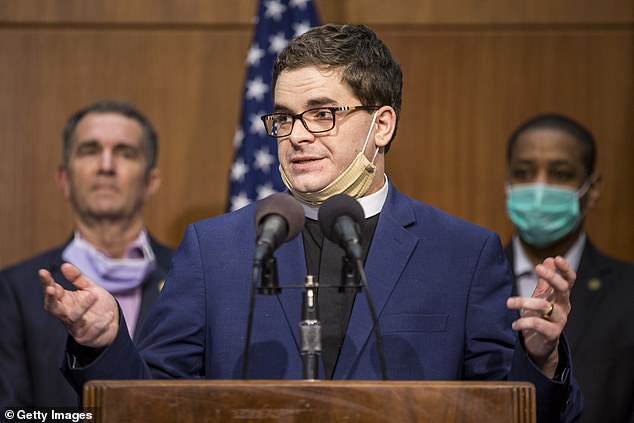 Last June Rob Lee appeared alongside Virginia Governor Ralph Northam to announce that a statue of Robert E. Lee would be removed from the state capital 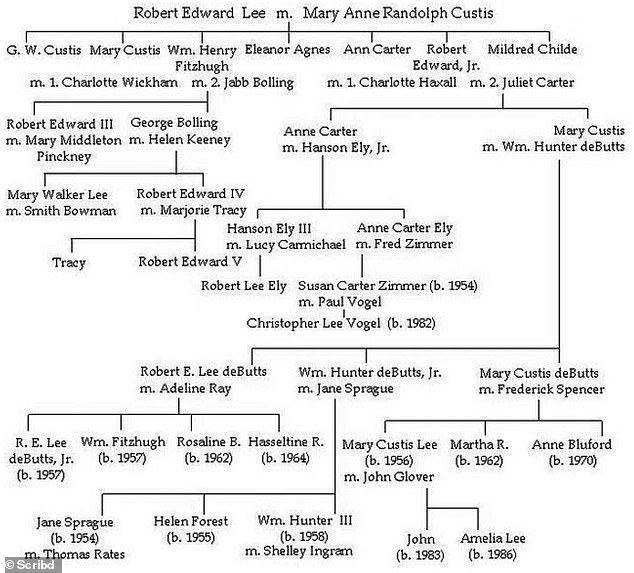 Robert E. Lee’s family tree is seen above. An extensive search could find no family ties between Rob Lee and the Confederate general

However, an extensive review of genealogical records showed no family ties between Rob Lee and Charles Carter Lee, or any of Robert E. Lee’s other brothers or immediate family.

Instead, Rob Lee’s ancestry appears to trace back to William Lee, who seems to have born in England in the 1700s, at least 100 years after Robert E. Lee’s earliest ancestor arrived in Virginia.

William Lee appears to have been a manager at a plantation in Georgia, where he posted a notice seeking a runaway slave in 1810, before buying land in Alabama.

William Lee’s son, Robert S. Lee, was a farmer and carpenter who fought for the Confederacy in the Civil War.

Already 39 when the war broke out, Robert S. Lee was too old for active service, but served as a ‘home guard’ in Alabama, records show.

When Robert S. Lee died in 1916, his obituary said he was regarded as the oldest native Alabamian, and noted that ‘nearly all his friends throughout the county’ called him ‘Uncle Bob.’

Records show that Robert S. Lee appears to be the great-great-great grandfather of Rob Lee, according to the Post. 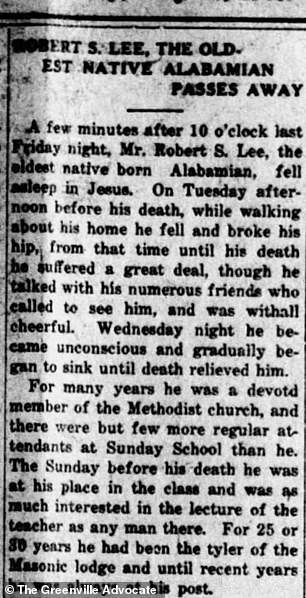 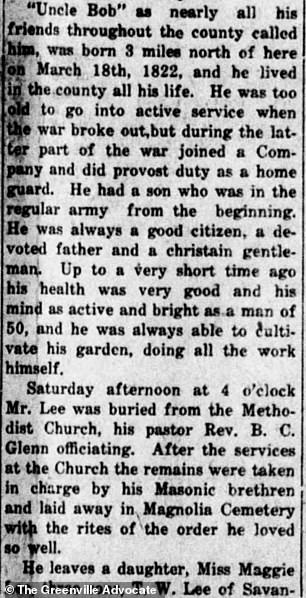 Rob Lee’s apparent great-great-great grandfather Robert S. Lee was a Confederate soldier, but not a general. His 1916 obituary (above) shows that he was known as ‘Uncle Bob’

Rather than General Robert E. Lee, Rob Lee appears to be related to another Confederate fighter with a similar name, whose ‘Uncle Bob’ nickname might have inspired the family lore.

Robert E. Lee V rarely speaks publicly on the subject of Confederate monuments, but has indicated he supports community decisions to move them to museums with full historical context.

Rob Lee did not respond to the Post’s repeated inquiries about his dubious ancestry claims, but responded with a series of statements after the article’s publication.

‘There is an article in the Washington Post about me being not related to Robert E. Lee. I have chosen not to engage because I am currently on a regiment of medication that has made it difficult to keep my head up,’ he said in a tweet.

‘There are also family dynamics that make this difficult,’ added Rob Lee. ‘Why the Post is so focused on my heritage and lineage while not focusing on the issues of the statue at hand is beyond me.’ 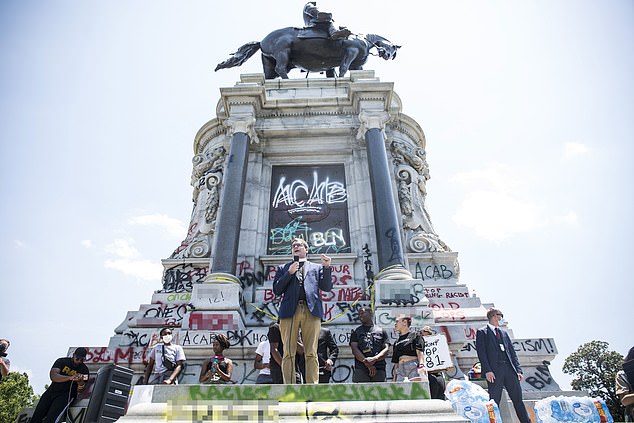 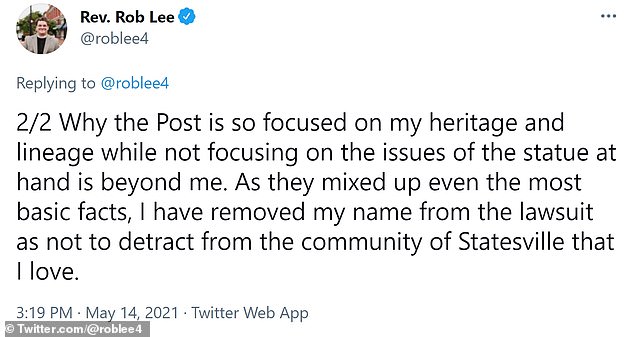 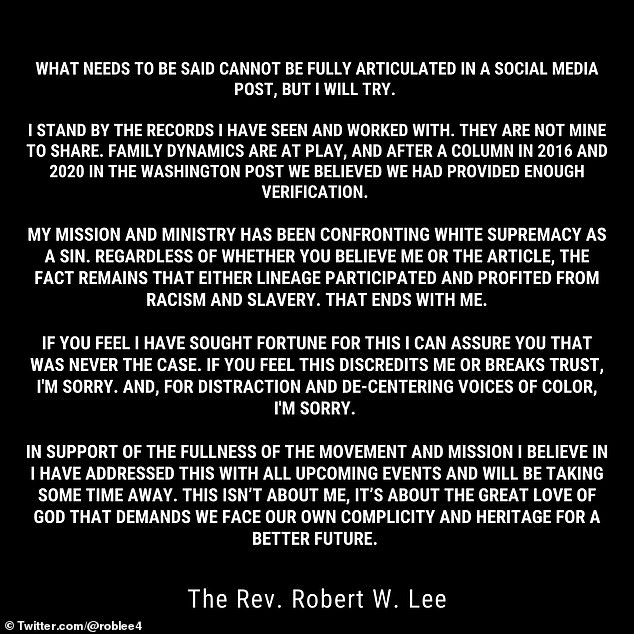 Rob Lee did not respond to the Post’s repeated inquiries about his dubious ancestry claims, but responded with a series of statements after the article’s publication

‘As they mixed up even the most basic facts, I have removed my name from the lawsuit as not to detract from the community of Statesville that I love,’ he said, referring to the Iredell County seat with the statue he is seeking to remove in a lawsuit.

In a statement on Sunday, he added: ‘I stand by the records I have seen and worked with. They are not mine to share. Family dynamics are at play, and after a column in 2016 and 2020 in the Washington Post we believed we had provided enough verification.’

‘My mission and ministry has been confronting white supremacy as a sin. Regardless of whether you believe me or the article, the fact remains that either lineage participated and profited from racism and slavery. That ends with me,’ he added.

‘If you feel I have sought fortune for this I can assure you that was never the case,’ said Rob Lee, adding that he would ‘be taking some time away.’