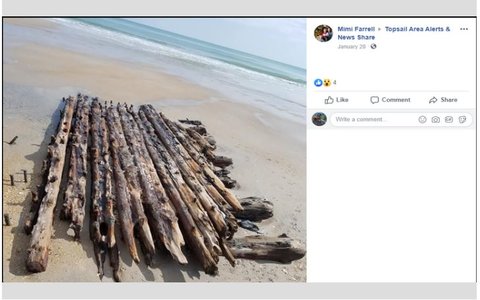 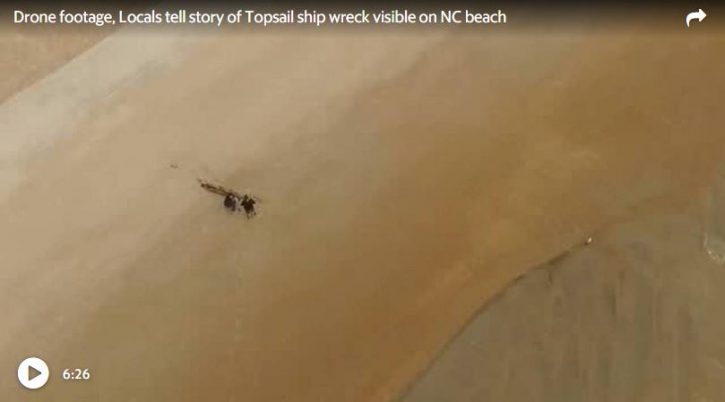 A ship that ran aground off Topsail Inlet nearly a century ago and vanished has reappeared thanks to the recent storm winds. The William H. Sumner ran aground in 1919 near Topsail Island after an alleged mutiny.

A three-masted schooner that dramatically ran aground in 1919 has resurfaced a century after an alleged mutiny led to the captain’s death and a murder trail for the crew.

Photos posted on Facebook by Mimi Farrell show a large cross section of the William H. Sumner has been revealed by wind and wave action on the beach at Surf City, North Carolina.

Parts of the Sumner have been known to pop out every few years, but this year is different, Farrell noted: “This is the most I have seen of it.

“Would love to see it dug up for a museum or something,” she wrote. “I know there is still more under the sand. You are not permitted to touch anything like this. I don’t know the history other than they murdered the Captain.”

Divers from Fayetteville-based Nautilus Productions excavate the site of the famous pirate Blackbeard’s shipwrecked Queen Anne’s Revenge off the coast of Beaufort, NC in 2009. The iconic anchor and cannon had not been recovered at this point. BY NAUTILUS PRODUCTIONS

Surf City officials reported a small section of the schooner’s deck popped out of the sand last year, near the 700 block of North Topsail Drive. The Topsail News identified the chunk wood as a 28-by-11 foot part of the deck.

The Sumner’s tale of mutiny and murder dates to September 1919, when it ran aground while sailing from Puerto Rico to New York City, according to the TopsailIslandblog.

“The story goes that the young 25 year old captain on his first voyage in command had sailed too close to the shore,” the blog says. “When the currents and winds left the schooner stranded near present day New Topsail Inlet … the ship was pulverized on the shoals.”

Crew members told officials the Sumner lost course, “sailed too close to shore” and got lodged in the shoals, according to Wrightsville Beach Magazine.

However, evidence emerged that the captain was killed after rations ran low and he refused to dock for supplies, the magazine reported.

Seven of the eight crew members were tried for murder, but the jury failed to reach a verdict in federal court, according to old news articles reproduced on TreasureNet.com.

Surf City Parks and Recreation says it is against the law to remove or damage the remains of shipwrecks.