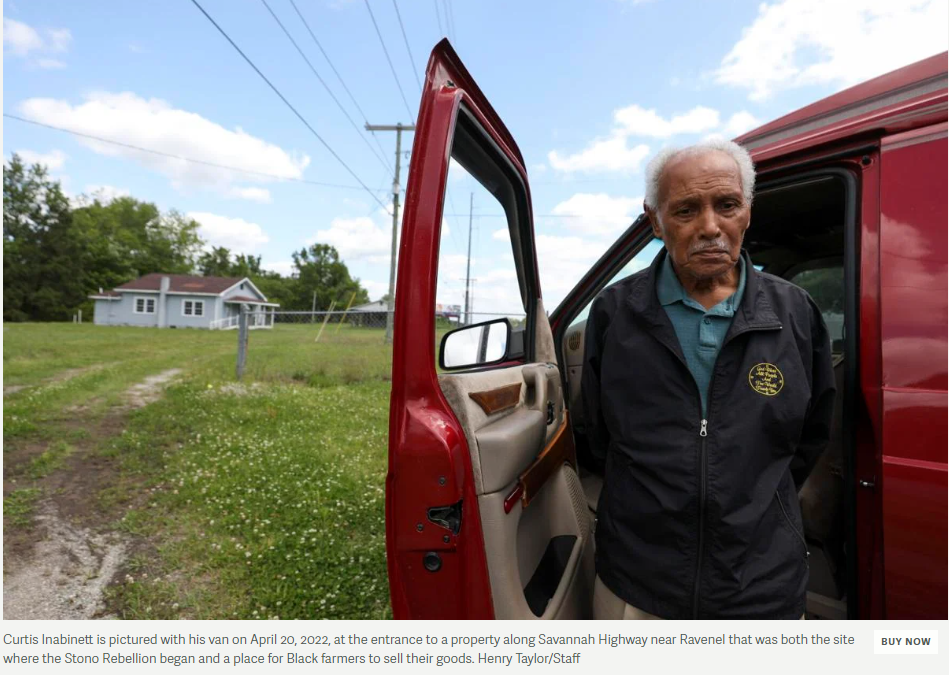 RANTOWLES, S.C. — When a group of Black farmers bought this property in the 1970s, they didn’t know its historical importance.

All they knew was that they needed a centrally located place to set up an agricultural operation that included a distribution center and marketplace.

The Sea Islands Small Farmers Cooperative was formed in the late 1960s by farmers on five sea islands who came together to pool resources and find creative ways to expand their reach. Before long, the cooperative consisted of 104 farmers who controlled, collectively, about 1,400 acres of arable land and gathered weekly at this site along Savannah Highway that butts up against Wallace Creek to do business.

Fifty years later, the cooperative is barely active. The property is protected by a locked gate, and is only noticeable from the highway because of two billboards and a couple of dilapidated structures. This spring, the land was sold for a little more than $1.6 million — the first step in its transformation from a dormant tract of land into a public site.

Two histories will be recounted there, and visitors will have access to the creek.

The project is spearheaded by the Lowcountry Land Trust and Lacuna Corp., with essential help from the Charleston County Greenbelt Program.

It was important to move fast, said David Ray, the trust’s chief conservation officer. The property is zoned general/commercial, sits on a bluff adjacent to deep water, and is located not very far south of Charleston’s city boundary. Real estate developers have shown an interest in it, but project leaders have other ideas, Ray said.

The Land Trust will place a conservation easement on the property to prevent any commercial or residential development, Ray said. It has worked with Lacuna to secure the tract and is planning to transfer the deed to Charleston County Parks, which already manages historic properties nearby, including the Caw Caw Interpretive Center, Meggett County Park, Johns Island County Park and the Stono River County Park.

The team applied for a Greenbelt grant that would reimburse Lacuna. The Greenbelt subcommittee and Charleston County Finance Committee approved the arrangement, and County Council voted in favor of it on April 26.

Ray said the new park would provide access to the river for paddlers and anglers, and the green space could eventually feature community gardening, a farmers market and more.

A couple of large sheds, one of which is severely damaged, would be removed or repaired, and an old house on the property would need extensive renovation due to termite damage. It could serve as a visitor center that includes bathrooms and site information. No new structures would be built, Ray said.

The old brick cellar would be protected and explained, and the history of the site conveyed with interpretive signage or by other means.

“The story of the Stono Rebellion can be told very well from this place,” Ray said. “The other story to tell is of the cooperative itself.”

When Curtis Inabinett got out of the military in 1957, he settled in Charleston County and started teaching vocational agriculture at Baptist Hill High School on Yonges Island. In the late 1960s, he and the county’s other two agriculture teachers, Cleveland Mott and William Richardson, decided to join the Federation of Southern Cooperatives in order to assist local Black farmers struggling to gain a foothold in markets that would broaden their reach.

With assistance from Rural Missions, the trio of teachers organized farmers on James, Johns, Wadmalaw, Yonges and Edisto islands, and used a large shed located near the corner of Main Road and Maybank Highway as a production facility. Local farmers would deliver their produce to the site, where it would be graded, packed and shipped.

Inabinett and others traveled up and down the Eastern Seaboard, even crossing the border into Canada, to find new markets.

As the operation grew, the farmers needed a better production and distribution site, and in the early 1970s they noticed a “For Sale” sign posted on the property off U.S. Highway 17 near Wallace Creek. It was a desirable location, but there was a problem: The Ku Klux Klan liked to meet there. If the would-be buyers revealed they were Black, surely their offer would be rejected.

So they tasked their attorney with handling the transaction, Inabinett said. The seller, located in Florida, agreed to the arrangement, and a deposit was paid to remove the property from the real estate market. At the closing, the seller discovered who she was dealing with, for several of the Black farmers showed up, and she reneged.

But contracts had been signed and money had changed hands, so her attorney advised her that she could not legally refuse to sell — and she relented.

The first Saturday after the closing, some of the farmers visited the property for the first time and were confronted by an angry group of White people hurling epithets.

A spokesperson for the farmers suggested the group find out who owns this tract. “This is ours, and we are asking you to leave,” he said.

As the angry White people made their way toward the exit, arguing and cursing, the Black farmers took down the charred wooden cross.

Eventually, enough money was earned to upgrade the farmers depot with a parking shed and other amenities. During the process of grading the land, they came across an underground brick structure. Contained inside were shards of pottery, crude tools and some broken smoking pipes made of stone.

They had happened upon the cellar of what surely was Hutchinson’s Store.

This was the place raided in 1739 by a group of escaped slaves who killed the White shop owners and appropriated a cache of weapons and ammunition. This was where the Stono Rebellion started.

Jemmy, a literate slave who likely was from the Congo, led the uprising, which began with 20 men on a Sunday morning in early September. Already the Charleston area was predominantly Black, and this was cause for concern among White planters and governors. The Security Act passed by the South Carolina Colonial Assembly in August required all White men to attend church armed, though the measure wouldn’t take effect until late in September. Nevertheless, some scholars surmise that Jemmy and his cohort were less likely to encounter resistance if they launched their escape effort while their masters were attending services.

The goal was to march south to Spanish Florida, which promised freedom to fugitive slaves. Along the way, the group recruited more participants, or perhaps strong-armed them into joining the rebellion, until there were as many as 80 men.

For 15 miles or so, they marched, waving a banner on which the word “Liberty” was written. They burned several plantations and killed perhaps 25 White people. As word got out, White residents formed militias to confront the freedom seekers near the Edisto River.

Most of the fugitives were killed; those who survived the onslaught were sold off. It was the largest slave revolt of the North American colonies.

The Stono Rebellion prompted a harsh response from the White authorities in charge of the colonies. Slavers were penalized for requiring their enslaved laborers to work excessively and for meting out corporal punishment considered too brutal. They launched an effort to teach Christian doctrine to enslaved people, though they were careful about which Bible stories to convey.

The Assembly passed a harsh new law: The Negro Act of 1740 required that the ratio of Blacks to Whites on plantations could not exceed 10 to 1, and it prohibited enslaved people from assembling in groups, earning money, growing their own food, or learning to read. It also empowered White colonists to detain and punish enslaved people in transit if they carried no official pass.

“We had no idea that we had bought the property where the 1739 slave revolt had occurred,” Inabinett said. “For all the years the farmers owned the property, they protected that structure.”

Thanks to an effort by the Sea Islands Small Farmers Cooperative, a historic marker was erected at the site. The unveiling was on Sept. 9, 2006 — the same date the rebellion started.

The artifacts recovered from the cellar now are displayed at the Charleston Museum.

The farmers’ operation worked well until Hurricane Hugo plowed through the Lowcountry in 1989, damaging almost everything in its path, including structures on the farmers’ property, and disrupting business.

Suddenly, the property taxes went up to around $15,000 a year, Inabinett said.

The farmer’s depot was generating no significant income back then, so the cooperative’s members scrambled to come up with the money. They started to rent the big shed to a cucumber producer based in North Carolina. They charged a small fee to those participating in an occasional farmers market. They sold cut flowers. And they signed a contract with Adams Outdoor Advertising to erect two billboards on the grounds.

For 20 years, they managed to fulfill their financial obligations, but now all the other founding farmers are dead, and the heirs have little interest in the property, Inabinett said.

Mike McShane, president of Lacuna and chairman of the S.C. Conservation Bank, said the purpose of his company is to protect historically significant properties from commercial and residential development. Since the private sector tends to move more quickly than government agencies, Lacuna is buying time so that a permanent solution can be found.

The company covered the cost of land surveys, appraisals, environmental studies and closing costs, investing around $100,000 into the project that it won’t get back, McShane said.

It’s well worth it, he said. The site’s value is immeasurable, given its history and access to the water.

During a visit to the old depot site, he recounted how two freshwater wells were dug to provide irrigation; how the farmers tried to grow grapes until deer and other animals decimated their crop; how the old house was brought there and used as an office, replacing a trailer that had been positioned by the tree line; how trucks once backed up to the big distribution shed; how numbers attached to the chain-link fence referred to assigned parking spaces rented by local farmers selling produce; how Hugo knocked down a big tree, which crushed a corner of the shed.

The history of this place runs deep.

“You don’t know how thankful I am that this property will be here for generations,” Inabinett said.