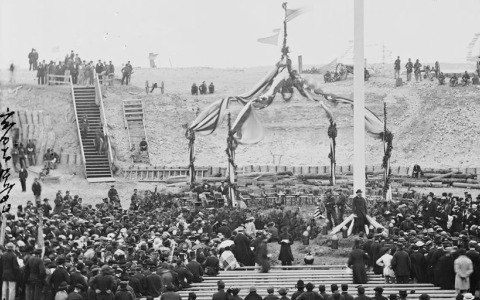 One hundred and fifty years after the Civil War began, its echoes are still felt across the United States in lingering divisions between North and South, in debates over the flying of the Confederate flag, and even in arguments over the basic causes of the conflict. Myths both big and small persist about the bloodiest conflict in American history. Here are a few …

Blacks, both free and slave, fought for the Confederacy.

The argument over whether blacks took up arms to fight for the government that enslaved them is a bitter one, but historians have busted this myth, Deaton said.

“It’s completely false,” Loewen said. “One reason we know it’s false was that the Confederacy by policy flatly did not allow blacks to be soldiers until March of 1865.”

The idea had been brought up before, University of Tennessee historian Stephen Ash wrote in 2006 in the journal Reviews in American History. In January of 1864, Confederate Maj. Gen. Patrick R. Cleburne proposed enlisting slaves. When Confederate President Jefferson Davis heard the suggestion, Ash wrote, he “not only rejected the idea but also ordered that the subject be dropped and never discussed again in the army.”

About three weeks before the Civil War ended, however, a desperate Davis changed his tune. By that point, the war was lost and few, if any, blacks signed up.

White officers did bring their slaves to the front, where they were pressed into service doing laundry and cooking, Loewen said.

The Union went to war to end slavery.

Sometimes, Loewen said, the North is mythologized as going to war to free the slaves. That’s more bad history, Loewen said: “The North went to war to hold the union together.”

Pres. Abraham Lincoln was personally against slavery, but in his first inaugural, he made it clear that placating the Southern states was more important. Quoting himself in other speeches, he said, “I have no purpose, directly or indirectly, to interfere with the institution of slavery in the States where it exists. I believe I have no lawful right to do so, and I have no inclination to do so.” [Read: The Best Inaugural Addresses Ever]

Abolitionism grew in the Union army as soldiers saw slaves flocking to them for freedom, contradicting myths that slavery was the appropriate position for African-Americans, Loewen said. But it wasn’t until the Emancipation Proclamation of 1863 — which left slavery intact in border states that hadn’t seceded — that ending Confederate slavery became an official Union aim.

The Civil War wasn’t about slavery.

The most widespread myth is also the most basic. Across America, 60 percent to 75 percent of high-school history teachers believe and teach that the South seceded for state’s rights, said Jim Loewen, author of “Lies My Teacher Told Me: Everything Your American History Textbook Got Wrong” (Touchstone, 1996) and co-editor of “The Confederate and Neo-Confederate Reader: The ‘Great Truth’ about the ‘Lost Cause'” (University Press of Mississippi, 2010).

In fact, Loewen said, the original documents of the Confederacy show quite clearly that the war was based on one thing: slavery. For example, in its declaration of secession, Mississippi explained, “Our position is thoroughly identified with the institution of slavery — the greatest material interest of the world … a blow at slavery is a blow at commerce and civilization.” In its declaration of secession, South Carolina actually comes out against the rights of states to make their own laws — at least when those laws conflict with slaveholding. “In the State of New York even the right of transit for a slave has been denied by her tribunals,” the document reads. The right of transit, Loewen said, was the right of slaveholders to bring their slaves along with them on trips to non-slaveholding states.

In its justification of secession, Texas sums up its view of a union built upon slavery: “We hold as undeniable truths that the governments of the various States, and of the confederacy itself, were established exclusively by the white race, for themselves and their posterity; that the African race had no agency in their establishment; that they were rightfully held and regarded as an inferior and dependent race, and in that condition only could their existence in this country be rendered beneficial or tolerable.”

The myth that the war was not about slavery seems to be a self-protective one for many people, said Stan Deaton, the senior historian at the Georgia Historical Society.

“People think that somehow it demonizes their ancestors,” to have fought for slavery, Deaton told LiveScience. But the people fighting at the time were very much aware of what was at stake, Deaton said.

The pre-Civil War era was the low point of U.S. race relations.

Slavery was a low point, no doubt, but the era between 1890 and 1940 was a “nadir of race relations,” Loewen said. Tiny steps toward racial equality were reversed. For example, in the 1880s, decades before Jackie Robinson stepped onto a major league field, a few black baseball players faced down racism to play for the professional leagues. That all changed in the 1890s, Loewen said.

“It was in these decades that white ideology went more racist than at any other time,” Loewen said. Eugenics flourished, as did segregation and “sundown towns,” where blacks were either officially or unofficially not allowed.

“In that period the North is not going to correct Southern historians for claiming that slavery and race had nothing to do with the Civil War,” Loewen said. “The North is being incredibly racist itself.”

The race-relations nadir gave rise to myths 1-3, Loewen said. It also heralded the Dixie ties now heralded by Union states such as West Virginia and Kentucky, he said.

Part of the re-casting of the Civil War may have been an attempt to smooth over North-South relations, Deaton said.

Civil War surgeons were butchers who hacked off limbs without anesthesia.

It’s a Civil War cliché: The brave soldier taking a gulp of whiskey and biting down on a bullet while a surgeon takes off one of his limbs with a hacksaw. Fortunately for Civil War casualties, though, field surgery was not quite so brutal. According to the National Museum of Health and Medicine, anesthesia (mostly chloroform) was commonly used by both Union and Confederate field surgeons.

“Anesthesia, from what we can tell, was pretty commonly available,” said George Wunderlich, the executive director of the National Museum of Civil War Medicine in Frederick, Md. “Confederate surgeons talk about using it all the way to the end of the war.”

War dispatches from doctors clearly show that anesthesia was considered a crucial part of surgery, Wunderlich said. When surgeons ran out of choloroform and ether, they would delay operating.

Civil War medicine was more advanced than many people believe, Wunderlich said. Almost 30,000 amputations took place due to battlefield injuries, according to statistics kept by the Army Medical Museum. But these amputations weren’t evidence of saw-happy doctors. Rather, the “minie ball” bullets used in the war were large-caliber and particularly good at shattering limbs. Amputation was often a safer option than trying to save the limb, which could lead to fatal infections in the days before antibiotics. Amputation was also very survivable: Below-the-elbow and below-the-knee amputations had survival rates of 75 percent to 85 percent, Wunderlich said.

One of the stranger stories to come out of the Civil War is that of a young Virginia woman standing on a porch as a battle waged nearby. Allegedly, a stray bullet passed through the scrotum of a soldier and into the young woman’s uterus. She survived, only to give birth to a baby boy with a bullet lodged in his scrotum nine months later.

If it sounds too incredible to be true, it is. The story first appeared in The American Medical Weekly in 1874, according to debunking website Snopes.com. Written by an “L.G. Capers,” the article was clearly a joke, as the editor of the journal clarified two weeks later. Nevertheless, the story has spread via outlets as varied as “Dear Abby” and the Fox television show “House.”