Six Generals Who Fought Against their Home States 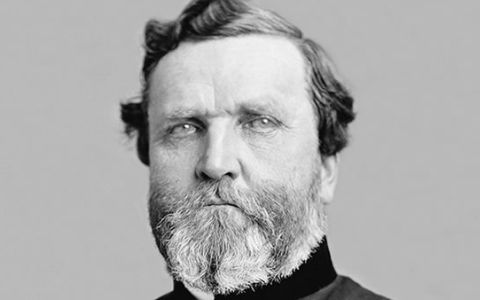 For many Americans, choosing a side in the Civil War was no easy task. While most people simply sided with their home state, others struggled with family pressures, personal political beliefs and their devotion to the federal government. Unwilling to break their military oaths, many Southern-born officers remained with the Union, but a surprising number of sympathetic Northerners also cast their lot with the Confederacy. These conflicted soldiers were often disowned by their families or regarded as traitors in their native states, but they also faced suspicion and distrust from their newfound brothers in arms. Below, get the facts on six generals who switched sides in the run-up to the Civil War.

According to some historians, the greatest and most skilled Union general may have been a southerner. A native of Southampton County, Virginia, George Thomas was a career soldier who had served with distinction in the Mexican-American War and later taught at West Point. But despite his strong southern roots—he’d grown up on a plantation and even owned slaves—Thomas refused to break his oath to the U.S. Army and remained loyal to the Union during the Civil War. The decision sent shock waves through the South. J.E.B. Stuart, a former pupil of Thomas’ at West Point, said he deserved to be hanged as a traitor. Even his own sister disowned him, writing that he had been, “false to his state, his family, and to his friends.”

Thomas nevertheless went on to become one of the Union’s most successful generals in the war’s western theater. After winning a crucial early victory at the Battle of Mill Springs, he led a heroic defensive stand at the Battle of Chickamauga in September 1863, and later crushed General John Bell Hood’s forces at the Battles of Franklin and Nashville. Despite his undeniable tactical acumen, Thomas’s stoic personality and his connection to the Confederacy saw him repeatedly passed over for promotions. When once told that Thomas should be given supreme command of U.S. forces in the West, Abraham Lincoln’s curt was response was simply, “let the Virginian wait.” Thomas ended the war with an unparalleled record, but his relationships with some of his family members never recovered. When they were sent supplies on Thomas’ behalf shortly after Lee’s surrender, his sisters are said to have refused the offering, saying they had no brother.

Many prominent American politicians threw their support behind the Confederacy, but few were as loathed in the North as Kentucky Senator John C. Breckinridge. Although he was a pro-slavery Democrat, Breckinridge favored the peaceful preservation of the Union, and in the late 1850s and early 1860s he regularly spoke out on the Senate floor against the march to war. He remained in the U.S. Senate even after the start of hostilities, and often acted as the lone dissenting vote against many of Lincoln’s military policies. Breckinridge returned to his home state in September 1861 to argue in favor of neutrality, but when Kentucky’s government backed the Union, he abruptly fled to Virginia to avoid arrest as a Confederate sympathizer. A few months later, his fellow legislators denounced him as a traitor and expelled him from the U.S. Senate by unanimous vote.

After settling in the South, Breckinridge offered his services to the Confederacy and won a commission as a brigadier general. He would rise to the rank of major general, and later served at key battles including Shiloh, Chickamauga and New Market. At the war’s end, Breckinridge once again found himself a marked man, and he fled the country to avoid prosecution as a turncoat. He would live in exile in Cuba, Europe and Canada until 1868, when President Andrew Johnson’s general pardon of Confederates allowed him to return to his home in Kentucky.

Few men took a more unlikely path to becoming a Confederate general than Bushrod Johnson. Born in Ohio to a family of abolitionist, pacifist Quakers, Johnson attended West Point against his parents’ wishes and later fought in both the Seminole War and the Mexican-American War. His budding military career came to a sudden end in 1847, when he was caught setting up a scheme to sell contraband government equipment. Forced to resign from the army, he spent the next several years working as a professor at military schools in Kentucky and Tennessee.

By the time the Civil War broke out, Johnson had reinvented himself as an unrepentant southerner. After sending his young son to live with his relatives in the North, he joined the Army of Tennessee as a colonel. Johnson quickly rose to the rank of brigadier general, and earned a reputation as a fierce fighter at the Battles of Fort Donelson, Shiloh, Perryville and Chickamauga. He was later appointed a major general, but his division was effectively destroyed at the Battle of Sailor’s Creek in April 1865, only a few days before Lee’s surrender at Appomattox. After the war, the “Yankee Quaker” returned to academia and eventually moved back to the North, settling in Illinois.

The Confederacy is usually associated with Dixie-born luminaries like Robert E. Lee and Thomas “Stonewall” Jackson, but the South’s highest-ranking military officer was actually a Yankee. Samuel Cooper was a New York native who forged an illustrious career in the armed forces, and by the 1850s he had climbed to the rank of adjutant general—the army’s chief administrative officer. Though a Northerner by birth, Cooper was married to the daughter of a prominent Virginia general, and he was also a close friend of Confederate President Jefferson Davis. In March 1861, he resigned his commission in the U.S. Army and switched sides to the Confederacy. Ironically, one of his last acts as adjutant general involved authorizing the dismissal of David E. Twiggs, an officer who had willingly surrendered his command to the rebels.

Cooper was immediately appointed the adjutant general of the Confederate Army, and he later became one of only a few Southern officers to attain the rank of full general. Cooper’s extensive experience proved invaluable in organizing the upstart Confederate Army, and he remained the South’s chief military officer for the rest of the war. Though he had little influence on field strategy, Cooper still earned his share of enmity from those in the North. While building defenses near Washington, D.C., Union forces demolished his home and used its bricks to build a fort dubbed “Traitor’s Hill” in Cooper’s honor.

David Farragut was arguably the most distinguished American naval commander of the Civil War, but he was initially mistrusted because of his deep connection to the South. A career Naval officer with an exemplary record—he’d seen his first action at the tender age of 12 during the War of 1812—Farragut was also a Tennessee native who had resided in New Orleans and Virginia and married a Southern woman. Many U.S. officials questioned his loyalty to the Union cause, and for most of 1861 he languished in a post on the Naval Retirement Board.

Farragut finally got his chance at glory in 1862, when he took command of a Union blockading squadron in the Gulf of Mexico. That April, he led his ships on a daring course past two Confederate forts before taking the city of New Orleans—his boyhood home. Promoted to rear admiral in July 1862, Farragut would later see action at Vicksburg and Port Hudson, but his greatest achievement came at the Battle of Mobile Bay in August 1864. While leading a fleet past several Confederate forts and ironclads, Farragut lashed himself to the rigging of his flagship to get a better view of the battle. When he saw some that some of his ships were slow to advance because of mines lurking in the waters, he urged them forward with the immortal line, “Damn the torpedoes! Full speed ahead!” Farragut’s fleet survived the treacherous crossing, and he later captured the forts and successfully closed the port at Mobile Bay.

Controversy swirled around John C. Pemberton’s entire Civil War career, to the extent that he was one of the few figures regarded as a turncoat by both the North and the South. A native of Philadelphia, Pemberton attended the University of Pennsylvania before graduating from West Point and embarking on a distinguished military career. He later married a Virginia woman, and after the bombing of Fort Sumter, he was forced to choose between taking up arms against his home state or that of his wife. Despite pleas from both his family and his former commander, Winfield Scott, Pemberton reluctantly resigned his post and joined the Confederacy after Virginia seceded.

Though considered a traitor in the North, Pemberton was also viewed with suspicion by many of his new Confederate colleagues. Nevertheless, he quickly climbed through the ranks and by October 1862 he had earned a promotion to lieutenant general. That same month, he was given a command that contained Vicksburg, Mississippi, a crucial transportation hub along the Mississippi River. Pemberton had orders to hold Vicksburg at all costs, but by May 1863 Union General Ulysses S. Grant had cut his way through Mississippi and pinned the Confederates within the city’s fortifications. Following a brutal six-week siege, Pemberton finally surrendered his starved and exhausted army on July 4. The defeat gave the Union dominion over the Mississippi River, effectively cutting the Confederacy in two. Southerners were quick to turn against Pemberton, and some speculated that his northern background had influenced his decision to capitulate. Speaking of one of the defeats that led to the siege, one even argued that Pemberton was “…either a traitor or the most incompetent officer in the Confederacy.” Disgraced, Pemberton voluntarily resigned his general’s commission and spent the remainder of the war as an artillery officer.