The Civil War Changed How We Looked At Death 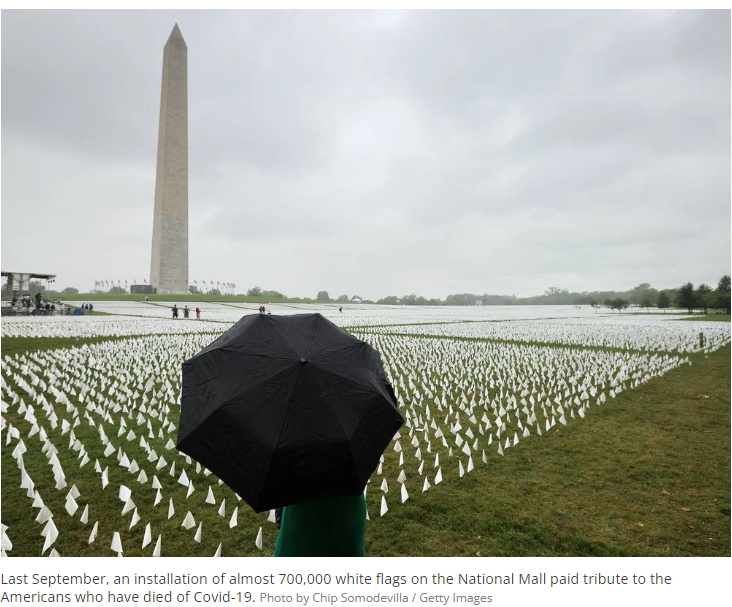 More than one million people living in the United States have died of Covid-19 during the past two years.

The numbers paint a clear picture of devastation, though they can’t capture the individual and familial pain of losing loved ones—a loss that will no doubt transform many more millions of Americans’ lives.

The impact of this mass death on American society as a whole is less clear, especially since the pandemic is not over. While there have been a few moments of public remembrance—700,000 white flags placed on the National Mall, and President Joe Biden’s brief words noting the “one million empty chairs around the dinner table”—the country is only beginning to grapple with the shared grief of so many deaths.

Instead, there is public discord surrounding those who died. In a country divided over basic facts about the virus, deaths have been exploited for political purposes or wrapped into conspiracy theories.

As a scholar of religion who has studied the history of death in America, I am quite preoccupied with how the country makes sense of, honors and remembers the Covid-19 dead. The magnitude of death today immediately brings to my mind the event that killed the second-highest number of Americans: the Civil War.

My first book, The Sacred Remains, looked at the conflict’s impact on Americans’ attitudes toward death, during another period of extreme division and overwhelming loss of life.

Roughly 750,000 people died in the Civil War, or 2.5 percent of the country’s population at the time—the equivalent of seven million Americans dying today.

The unprecedented death toll had profound consequences on American cultures of death for generations, particularly through the emergence of the funeral industry.

Throughout the 19th century, most Americans died, and had their bodies tended to, at home. Last moments with the corpse were with loved ones, who were responsible for washing and preparing it for the final rituals before burial, generally in local churchyards.

But the Civil War provided an opportunity for a game-changing development. Embalming was an innovative method of preserving bodies that allowed some Northern families to have their war dead retrieved from the mostly Southern battlefields and brought back to be buried in Northern soil.

The display of President Abraham Lincoln’s embalmed body after his assassination was a pivotal moment in this transformation. His corpse was transported on a train from Washington, D.C. to Springfield, Illinois, with frequent stops in many Northern cities where it was put on display for grieving Americans.

As embalming became more common, it helped legitimize a new class of professional experts: funeral directors, whose homes became a mix of business, mortality, religion and their own domestic life. By the early 20th century, this new business had established a fairly standard American way of death, centered on the viewing of an embalmed body to bring a community together.

Americans’ relationship with their dead would never be the same. The intimacies the living had with the dead before the Civil War gradually disappeared, as funeral homes managed the care of more and more bodies.

One of my intellectual heroes, sociologist Robert Hertz, wrote a famous essay about death and society in 1907. He argued that social groups represent themselves as immortal, capable of overcoming the death of any member. The community’s survival depends greatly on transcending death, so it transforms the dead into sacred symbols of group identity and social cohesion.

Hertz’s studies focused on death in small societies in Borneo. Yet his exploration of the relationship between the death of the individual and the life of the social group is pertinent now, in the context of the pandemic—as it was in the aftermath of the Civil War.

The victorious Union turned dead soldiers into symbols of the nation. Their deaths were seen as sacred sacrifices to preserve the country. For religion scholars, this is a clear example of American civil religion. In the U.S., civil religion is a patriotic culture that sees America as a sacred, exceptional country, built on shared ideals, myths and traditions.

But the Northern victors did not “control the narrative,” as we say these days. Indeed, a very striking and still-present counternarrative soon developed among the vanquished Confederates after the war. The losers built an alternative civil religious culture, what historians refer to as “the religion of the Lost Cause.”

For many white Southerners, the battlefield dead did not signal that God had abandoned their cause, but rather illuminated his support for values associated with the Confederacy—values the United States is still grappling with today. They saw the loss as a temporary setback but believed that ultimate victory would come if they maintained some form of Southern cultural purity based on notions of racial, regional and religious superiority.

The politicization of death is not uncommon in American history, particularly during times of profound social crisis. And since the start of the pandemic, the same has happened with Covid-19 victims.

Death during a pandemic is obviously different from death during a civil war. In both cases, however, it is difficult for a divided country to experience unity in the face of an enormous loss of life and to agree on what those deaths mean for the nation.

Unique aspects of the pandemic make national mourning, and united healing, even more complicated. For example, the virus has not taken an equal toll across the country. The death toll shows significant disparities among different economic and racial groups. And the need to prevent contagion has intensified the physical separation between the living and the dead, making some meaningful rites of mourning difficult or impossible.

Many communities have made efforts to commemorate the pain of the pandemic, such as through Día de los Muertos, a Mexican holiday honoring those who have died. But there have been minimal efforts to help make sense of the deaths on a national level: to rally around a compelling public narrative about the tremendous loss of life and grief. It remains to be seen if Americans will eventually incorporate the losses into a unifying civil religion, or only use them to reinforce polarization.