The Southern Cross of Honor 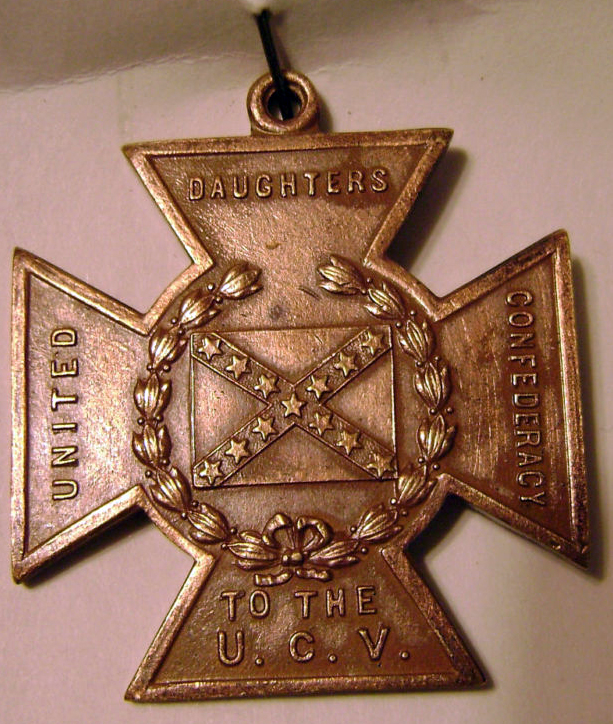 Over the last several months, on genealogical mailing lists to which I subscribe, I’ve seen discussions about “The Southern Cross of Honor.” Questions have arisen about its origin, when it was awarded, and what the meaning of the inscription on it means. I’d like to discuss the background of this medal.

Following the U.S. Civil War, many women in the South worked hard to rehabilitate the country and the economy, and most of all to help its Confederate veterans. For three decades following the war, these local women’s groups did their utmost to recognize the sacrifices made by their soldiers. Among their other efforts for veterans and their families, they raised money to erect monuments, set tombstones in cemeteries, and to maintain graves. Two of the local organizations came into existence as early as 1890, the Daughters of the Confederacy in Missouri, and the Ladies’ Auxiliary of the Confederate Soldiers Home in Tennessee.

On 10 September 1894, the United Daughters of the Confederacy was organized. According to the book, The Source: A Guidebook of American Genealogy, its members “are lineal or collateral descendants of men or women who served in the military or civil service of the Confederate States of America, or who gave material aid to the cause.”

The Southern Cross of Honor

The Confederate Congress approved an act on 13 October 1862 to honor the officers, non-commissioned officers and privates for their valor in the armies of the Confederate States. During the war, however, there were shortages of metals, and many medals were not minted or awarded. The names of these soldiers were, however, recorded in an Honor Roll and preserved in the Adjutant Inspector General’s records.
According to a form letter I recently received from the UDC, the story is that the Southern Cross of Honor was conceived by Mrs. Alexander S. Erwin in July of 1898 while attending a reunion of Confederate veterans in Atlanta. She is credited with the design of the medal, which was manufactured by Mr. Charles W. Crankshaw of Atlanta. The design consists of a cross with a Confederate battle flag surrounded with a laurel wreath on the face of the medal, with the inscription “The Southern Cross of Honor.” On the back of the medal is the motto of the Confederate States of America, “Deo Vindice” (God Our Vindicator), the dates 1861 1865, and the inscription, “From the UDC to the UCV.” (UCV stands for the United Confederate Veterans.)
Applications were made by veterans and their families and descendants for the medal. I have a copy of the application made by my great-grandfather, and an exact transcription of the application (complete with spelling and punctuation errors), which reads as follows:

The United Confederate Veterans (UCVs) were veterans’ groups organized into units called “camps.” They functioned as social organizations, conducted fund-raising events to support their camp group, maintained information about the geographical area, kept the records of local members, and helped maintain the graves of deceased comrades.

Awarding of the Southern Cross of Honor

The UCV organizations helped members complete their applications and certificates of eligibility for the Southern Cross of Honor. Many local chapters of the UDC worked with the UCVs to arrange grand ceremonies for the awarding of the large groups of medals. In some places, parades were arranged to commemorate the service of the Confederate soldiers and great veterans’ reunions were held. Later applicants were awarded their medals individually.
The UDC reports that 12,500 crosses were ordered and awarded within the first eighteen months of their existence, and that 78,761 had been delivered by the UDC by the year 1913.

Who Has the Medals Today

I would love to find out what happened to the Southern Cross of Honor bestowed on my great-grandfather in Rome, GA, in November of 1912. (Yes, it took twelve years to process the application, mint the medal, and make the award.)
The UDC maintains the records today for the Southern Cross of Honor. If you wish to confirm that the medal was awarded to your ancestor, you must determine the name, the state, the company, and regiment of the individual. You can then send this information to the UDC at the following address:

The UDC does not have copies of the applications submitted for the Southern Cross of Honor. They do, however, maintain books with the roll of the recipients. These records may contain the UCV camp to which your ancestor belonged, the UDC chapter that awarded the Southern Cross of Honor, and the date and place of the award. (Please note, however, that not all records are this detailed.) To obtain a copy of this information, you will need to send a check in the amount of $5.00 and an SASE to the UDC Business Office at the above address.

The UDC has come into the possession of a number of the Southern Cross of Honor and other medals. These are presented as sets to museums and libraries for display and education. If you should have one of the crosses, and no longer want to keep it, you can return it to the UDC business office and it will be placed in a set to be presented to a museum or library.

The UDC and the SCV perform an important role in preserving information about the past and in educating people about the Civil War. As in any conflict, there were multiple perspectives, and details about these are to be preserved if we are to learn from the past.