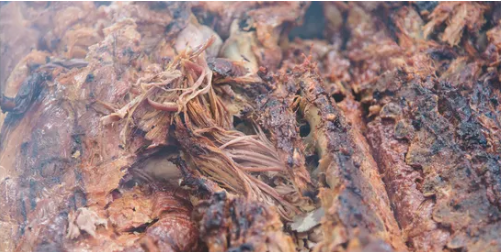 Southern Living‘s 50 best barbecue places is always a controversial list, but this year we have to agree wholeheartedly with its No. 1 (and most others). Here are the top 10, all credits to the magazine and its contributors.

When John Lewis moved east from Austin in 2016 and opened a Central Texas-style joint in the heart of Charleston, he accomplished something remarkable. No, not winning over a bunch of pork-eating Carolinians to the glories of slow-smoked brisket, though that was impressive enough. The real feat was establishing a genuine Texas-style craft operation—complete with prime-grade brisket, ribs, and sausage cooked on giant offset smokers — that’s open seven days a week, doesn’t sell out before dark, and doesn’t make guests wait for hours in line. The thick-sliced brisket is world-class, too, with rich marbling and a flawlessly smoky bark. For my money, though, the house-made green chile cheddar sausage steals the show, offering a big punch of smoke balanced by gooey cheese and a surge of chile heat. With a slate of tequila cocktails and Shiner Bock on tap, it’s a welcome Texas oasis in the heart of the Holy City.

Yes, there is such a thing as Georgia-style barbecue, and it can be found in its purest form at Fresh Air in Jackson. The moment you step through the front door, your nose fills with the tempting aroma of oak and hickory smoke from the old L-shaped brick pit that’s right behind the counter. No brisket or ribs appear on the menu board at this Peach State icon, which dates back to 1929. Barbecue here means one thing and one thing only: chopped pork dressed in a thin, spicy red sauce. You can get it on a “regular” plate with stew, white bread, and saltines, or make it a “special” by adding a cup of finely diced slaw. That stew is of the Brunswick variety, of course. With fine shreds of beef and kernels of corn enrobed in a thick tomato-laced broth, it’s as fine a version of that classic Georgia barbecue side as you’ll find anywhere.

Barbecue fashions may be shifting elsewhere in the South, but in Lexington, North Carolina, they’re sticking to the traditional Piedmont style, which originated there a century ago. Named after the town itself, Lexington Barbecue remains the premier place to sample that distinctive style. Wayne Monk opened the restaurant in 1962, and more than a half century later his family is still cooking pork shoulders on closed brick pits directly over glowing oak and hickory coals. Whether you order it chopped, sliced, or coarse chopped is totally up to you, but expect it to be generously dressed in “dip”—the local term for the region’s signature sauce. With a thin vinegar base tinged red with ketchup, that sauce adds the perfect zip to the pork’s subtle smoky richness, and it gives the region’s signature “red slaw” its distinctive color, too.

Ribs are the name of the barbecue game in Alabama, and the best ribs in the state—and perhaps in the entire country—can be found just over the river from Tuscaloosa at Archibald’s. They cook them hot and fast over a hickory fire on a big brick-and-cinder block pit, imparting a firm, meaty bite with delightfully crisp, charred bits around the edges. The ribs are served doused in spicy, orange-hued vinegar sauce with slices of white bread laid over the top—perfect for creating impromptu sandwiches or soaking up the savory sauce. Now run by the grandchildren of founders George and Betty Archibald, the restaurant remains a bare-bones operation, serving just ribs and sliced pork with potato chips, beans, and slaw for sides. With such meaty, smoky slabs like these, though, do you really need anything more?

The roots of today’s craft barbecue movement can be traced to December 2009, when Aaron and Stacy Franklin parked a retrofitted Aristocrat Lo-Liner camper and a 500-gallon offset pit on the side of an I-35 access road and started selling slow-smoked meats. In March 2011, they moved into a blue and white cinderblock building on East 11th Street, and eager fans, drawn by wall-to-wall social media and television coverage, lined up for three hours or more to see what the fuss was about. Two best-selling cookbooks and a PBS TV show later, Aaron Franklin has become an international barbecue celebrity, but his restaurant remains at the top of its game. That means tender, juicy prime brisket brimming with black pepper, smoky pork ribs, and rich, meaty housemade sausage with a perfect snap to the casing. Yes, you still have to wait in an hours-long line to try it, but you wouldn’t have the full Texas craft barbecue experience without it.

Long line queuing up an hour or more before opening? Check. Cooler of free beer while you wait? Check. Succulent brisket, ribs, and sausage slow-smoked over post oak? Check. So what puts Goldee’s out ahead of the other worthy new arrivals on Texas’s craft barbecue scene? It comes down to sheer quality. Every single thing they serve is top notch, right down to the slices of white bread that come with each order, for the loaves are baked fresh in house. This remarkable offering is the handiwork of five young but accomplished pitmasters who learned the ropes at some of Texas’s most acclaimed barbecue joints before banding together to open their own spot in the early months of 2020. The slim menu focuses on the Texas essentials: moist, pepper-crusted brisket, tender ribs with a tangy glaze, juicy turkey, and peppery sausage links. The sides also keep it simple—potato salad, coleslaw, splendid pinto beans in a rich tomato-studded broth—with one glorious exception: a thick, succulent pork hash served over rice. It’s a side dish borrowed from South Carolina, but with a spicy Texas twist that’s all its own.

In recent years, pitmasters as far away as Texas have begun emulating Skylight Inn’s distinctive style of whole hog barbecue, but no one has quite managed to equal it. Perhaps it’s the sheer amount of wood they use to fire the open brick pits (just check out the chaotic mounds of split oak behind the old pit house.) Or perhaps it’s how they dress the hogs once they’re cooked, pulling the meat and seasoning it with salt, cider vinegar, and Texas Pete while chopping it with cleavers on a giant wooden block. And then there’s Skylight’s signature finishing touch: bits of skin, crisp from the pit, that are chopped right into the meat, adding a delightful extra crunch to each tender, smoky bite. Founder Pete Jones opened the restaurant as a roadside barbecue and burger joint in 1947, and his son Bruce, nephew Jeff, and grandson Sam carry on the wood-cooked legacy today. The essential order remains a paper tray of splendid chopped barbecue topped with a square of cornbread and another small tray of sweet mayo-dressed coleslaw. It’s as fundamental as North Carolina barbecue gets.

Louie Mueller still sets the standard for the Central Texas “meat market” style of barbecue. The setting is a classic, especially the still-unairconditioned main room where you order meats by the pound at a long wooden counter and, if you choose, eat them at a battered table amid the warm haze of fragrant post oak smoke. Those of a less historic bent can find air conditioning and newer picnic-style tables in the big dining room next door, but either way they’ll enjoy slow-smoked meats pulled from the warming pit and sliced fresh to order. Mueller’s has long been heralded for its succulent brisket, and rightfully so, for the lushly marbled beef has a caramel-like sweetness to each bite. The turkey is smoky and tender, and the hot links spout a geyser of fatty juice with the first bite. The real showstoppers, though, are the beef ribs. Louie Mueller’s grandson Wayne, who leads the operation today, introduced these massive slabs of silky prime-grade beef to an eager Texas market, and they’ve since become as famous as the brisket.

A visit to Snow’s is a rare barbecue experience. For starters, the restaurant is open just one day a week (on Saturdays.) Service starts at the early hour 8:00 am, and eager fans begin lining up outside the carving room in the dim light of dawn. They’re there to sample some of the best smoked meats anywhere and also to meet a genuine barbecue star. Octogenarian pitmaster Tootsie Tomanetz started cooking barbecue more than a half century ago at City Meat Market in Giddings, and she was recruited by owner Kerry Bexley in 2003 to oversee the pits at Snow’s. Those pits, a combination of square metal-lidded direct heat cookers and long offset smokers, produce some amazing meats: firm sausage with a great snap to the casing, hearty spareribs, brisket tinged almost purple with smoke. The two best bites, though, are the chicken and pork shoulder, which are rare finds in the heart of Texas beef country. Eight bucks buys a half chicken with pepper-laced skin and juicy meat inside, and Snow’s pork shoulder steak, with a concentrated dose of smoke in its mahogany bark, is simply out of this world.

On my most recent visit to Scott’s Bar-B-Que in Hemingway, I noted two new signs affixed to the blue metal roof. One bears the restaurant’s name in hand-drawn letters along with a pig and the words “Pit Cook.” The other displays a color photograph of Roosevelt “Rosie” Scott and declares, “The Bar-B-Que Legend, Gone but Not Forgotten.” The restaurant’s founder passed away in December 2020, but the Scott family is carrying on the patriarch’s legacy with pride. That legacy is the best barbecue to be found anywhere in the South.

There are plenty of restaurants with fancier decor, broader menus, and more high-tech cooking methods, but there’s simply no barbecue bite that can compare to Scott’s Pee Dee-style whole hog. The process begins with cutting down white oak and pecan trees and splitting the logs in the big lot behind the old country store. Once seasoned, the logs are reduced to embers in a giant burn barrel, its sides warped by years of heat, then carried by the shovelful into the cookhouse and scattered beneath whole hogs on smoked-blackened cinder block pits. After 12 hours, the pigs are flipped and mopped with a pepper-laced vinegar sauce that bubbles and simmers around the meat. Pulled by hand into long, tender strands, the succulent pork has a fiery red pepper bite followed by the sweet, smoky essence of hardware smoke. Scott’s has been at the top of Southern Living‘s list since we started ranking the joints in 2018 (before that the Top 50 were presented alphabetically), and its unparalleled whole hog barbecue keeps it in the number one slot once again in 2022.