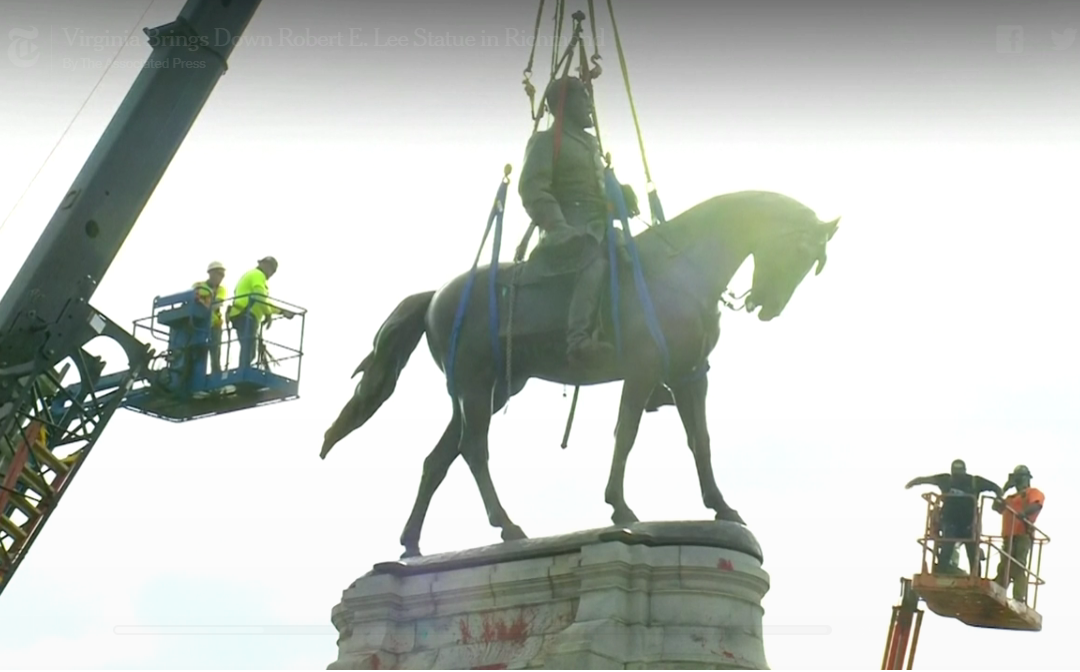 RICHMOND, Va. — One of the nation’s largest Confederate monuments — a soaring statue of Robert E. Lee, the South’s Civil War general — was hoisted off its pedestal in downtown Richmond, Va., on Wednesday, bringing to an end the era of Confederate statues in the city that is best known for them.

At 8:54 a.m., a man in an orange jacket waved his arms, and the 21-foot statue rose into the air and glided, slowly, to a flatbed truck below. The sun had just come out and illuminated the towering, graffiti-scrawled granite pedestal as a small crowd let out a cheer.

“As a native of Richmond, I want to say that the head of the snake has been removed,” said Gary Flowers, a Black radio show host and civil rights activist at the scene.

It was an emotional and deeply symbolic moment for a city that was once the capital of the Confederacy. The Lee statue was erected in 1890, the first of six Confederate monuments — symbols of white power — to dot Monument Avenue, a grassy boulevard that was a proud feature of the city’s architecture and a coveted address. On Wednesday, it became the last of them to be removed, opening up the story of this city to all of its residents to write.

“This city belongs to all of us, not just some of us,” said David Bailey, who is Black and whose nonprofit organization, Arrabon, helps churches with racial reconciliation work. “Now we can try to figure out what’s next. We are creating a new legacy.”

The country has periodically wrestled over monuments to its Confederate past, including in 2017, after a far-right rally in Charlottesville, Va., touched off efforts to tear them down — and to put them up. Richmond, too, removed some after the murder of George Floyd last year, in a sudden operation that took many by surprise. But the statue of General Lee endured, mostly because of its complicated legal status. That was clarified last week by the Supreme Court of Virginia. On Monday, Gov. Ralph Northam, who had called for its removal last year, announced he would finally do it.

Celebration after the removal of the Robert E. Lee monument, which was installed in 1890.Credit…Michael A. McCoy for The New York Times

The battle over Civil War memory has been with Americans since the war itself. At its root, it is a power struggle over who has the right to decide how history is remembered. It is painful because it involves the most traumatic event the nation has experienced, and one that is still, to some extent, unprocessed, largely because the South came up with its own version of the war — that it was a noble fight for states’ rights, not slavery.

The Lee monument, a bronze sculpture made by a French sculptor, was erected to make those points. When it was unveiled, on May 29, 1890, the crowd that turned out was the largest gathering in Richmond since the inauguration of Jefferson Davis as president of the Confederacy in 1862, with around 150,000 participants, according to the Virginia Department of Historic Resources.

The statues on Monument Avenue were at the heart of Richmond’s identity, and the fact that they came down seemed to surprise almost everybody.

“I would have thought somebody would blow up Richmond first before anyone would have let that happen,” Mr. Bailey said. “It’s a modern-day miracle.”

But Richmond has changed. And as it became more diverse, demographically and politically, more of its residents began to question the memorials. Many people interviewed in this once conservative city said that they might not have agreed in past years, but that now the removal of the statues felt right.

“I’ve evolved,” said Irv Cantor, a moderate Democrat in Richmond, who is white and whose house is on Monument Avenue. “I was naïvely thinking that we could keep these statues and just add new ones to show the true history, and everything would be fine.” 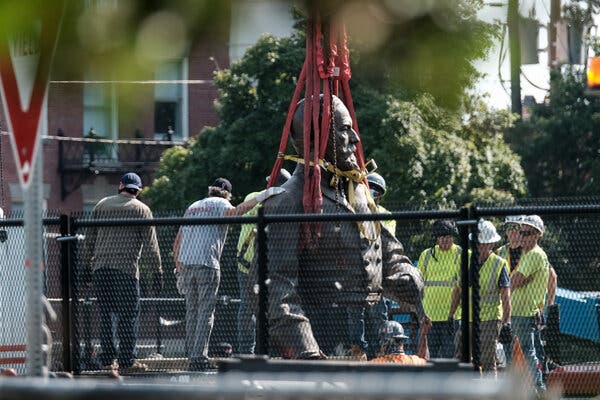 But he said the past few years of momentous events involving race, from the election of the first Black president, to the violence in Charlottesville in 2017, to the killing of Mr. Floyd last summer and the protests that followed, showed him that the monuments were fundamentally in conflict with fairness in America.

“Now I understand the resentment that folks have toward these monuments,” said Mr. Cantor, who is 68. “I don’t think they can exist anymore.”

Now they are nearly all gone, and the city is littered with a series of empty pedestals, a kind of symbol of America’s unfinished business of race that is particularly characteristic of Richmond. (One smaller Confederate monument remains, of General A.P. Hill, in northern Richmond, far from Monument Avenue. The city has enacted a plan to remove it, but it has taken time because his remains are inside.)

“We’ve begun to peel back the scabs,” said the Rev. Sylvester Turner, pastor at Pilgrim Baptist Church in the Richmond neighborhood of Eastview, who has worked on racial reconciliation in the city for 30 years. “When you do that, you experience a lot of pain and a lot of pushback, and I think we are in that place.”

Richmond’s statue story is not typical. W. Fitzhugh Brundage, a historian at the University of North Carolina at Chapel Hill, said that while several Democratic-controlled cities in the South have removed Confederate statues, a vast majority have remained standing. In his state of North Carolina, there were about 220 memorials on public lands in 2017. Today, about 190 are still standing.

Progress on race in America tends to be followed by backsliding — and backlash — and many Black people interviewed in Richmond said they were bracing for that. Darryl Husband, senior pastor of Mt. Olivet Church in Richmond, works with conservative white churches and does not trust that they really want the change they say they do.

Mr. Husband was unsentimental about the Lee statue coming down, more interested in real change that would improve the lives of Black people.

“My first feelings obviously had to do with, ‘OK, what’s next?’” he said. “The symbol is down, but how do we deal with the rest of the symptoms that symbol represented?”

In Richmond, as in many other places, the argument over race now centers on whether American institutions have racism baked in.

Maggie Johnston, 62, a waitress who is white, might have rejected that notion earlier in life. She grew up in a Republican family whose firm belief was that hard work always brought success. But time in prison — and a wrenching reckoning with her own mistakes — opened her eyes.

Ms. Johnston, who watched the monument come down on Wednesday while walking her dog Peanut, said her friends say, “I’m a hard-working person and I don’t have any privilege.” She tells them that privilege is not about money. “Privilege is about thinking the world works for everybody else the way it works for you.”

Mr. Husband argued that the current thinking from conservatives on race was about who has the right to define America: “It says don’t mess with our power. Our power is in our ability to create the narrative of history.”

Corey Widmer, pastor at Third Church, a mostly white, largely conservative church in Richmond, said he had wrestled with resistance to the current moment. He has worked hard to help his congregants accept how much the country has moved on race. They have read books, held Zoom sessions and debated what was happening. Some congregants changed. Others left the church.

“There’s so much fear and so much political polarization,” said Mr. Widmer, who is white. He said every pastor in Richmond who is trying to help white Christians see Black Americans’ perspective and “reckon with our own responsibility has really been grieved by the conflict and pain that it has caused.”

He added: “And yet this is how we change. Face it head on. Work through it. Love each other. Try to stay at the table. And just keep working. I don’t know what else to do.”

On Wednesday morning, with the pedestal now empty, and General Lee on his way to a state warehouse, Mr. Flowers, the radio show host, was happy. He said he planned to celebrate by telling pictures of his dead relatives that “the humiliation and agony and pain you suffered has been partly lifted.”

Sabrina Tavernise is a national correspondent covering demographics and is the lead writer for The Times on the Census. She started at The Times in 2000, spending her first 10 years as a foreign correspondent.