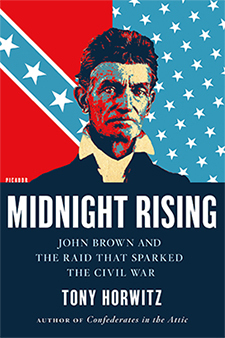 Tony Horowitz's new book examines the life of the man who sparked the Civil War.

Many Southerners have denied that the Civil War was fought over slavery, arguing that the war was really in defense of states’ rights. But the right they were defending was to continue the “peculiar institution” of slavery. The abolitionists, mostly from the North, believed that owning another person was immoral.

Although he was too stubborn and independent to belong to any organized movement, the tall, grim-faced John Brown was the most dangerous abolitionist of them all. He always said he was willing to die for what he believed.

On the Oct. 16, 1859, he led the 18 men (two of them his own sons) who made up the Provisional Army of the United States down the hill and seized the Federal Arsenal in Harpers Ferry. “I come here from Kansas,” he announced. “I want to free all the Negroes in this state.” He said he was in charge, and if anyone opposed him, “I must only burn the town and have blood.”

His plan, if he could be said to have one, was to hold the arsenal until the South’s slaves rose up to join him, and he would set them free. A few did, but he also aroused the attention of opponents like Robert E. Lee, J.E.B. Stuart and “Stonewall” Jackson. John Wilkes Booth was there, too, and while he hated Brown and everything he stood for, he took inspiration from his daring act. Brown was soon overwhelmed and he and the rest of his army faced trial for murder and treason.

Now, 150 years later, the author of this book rode into a landscape that has changed relatively little since Brown’s raid. As he described the town today, I anticipated a book like “A Voyage Long and Strange,” in which he personally retraced the routes taken by the first Europeans to explore our country — men like Eric the Red, and the Pilgrims, and before them Coronado and de Soto and Ponce de Leon. Or his “Confederates in the Attic,” during which he saw the Civil War through the eyes of the men who even today are re-enacting those long-ago battles.

But this was not his plan. Author Tony Horwitz wanted to get “inside their heads” — to learn what led them to attack their own countrymen, “to kill and die in the civil war that followed.” And that is what he has done with “Midnight Rising: John Brown and the Raid that Sparked the Civil War,” telling Brown’s story from his impoverished boyhood in Connecticut to the raw reality of life in the Western Reserve of Northern Ohio. He not only describes Brown’s own death but tells what happened to everyone who played a part in his life.

Horwitz is a skillful historian and tireless researcher, but this book does not have the appeal of earlier works in which he actually involved himself in the story.

Still, he tells his story well, and if he does not make Brown very sympathetic, he does get across his courage and dedication to the cause he believed in. But Brown was also a fanatic and was probably not sane (the Chicago Press and Tribune called him “As mad as a March hare”), and he was willing not only to give his own life to the cause but the lives of everyone around him. He never had much money, yet when he raised some from his lectures and fundraising drives, he sent little home for his wife and children. He had 20 of them, with two wives, although some of his children died in infancy and others as a result of his own ambitions.

Brown was tireless in his efforts to enlist others in his cause. Horace Greeley called his plan “the work of a madman,” and fiery abolitionist William Lloyd Garrrison described his attack as “misguided, wild and apparently insane.” Even Frederick Douglass, the escaped slave who became a leading abolitionist and adviser to President Lincoln, refused to get involved, warning Brown that he was leading his men into a “steel trap.”

In the years since, Brown has become something of a martyr, a brave man willing to give up his life to free the slave, but Horwitz sees the man too clearly to accept such a verdict. He recognizes Brown’s part in bringing on the war, but also sees clearly that his way of action was close to suicidal. As Lincoln sums it up: “It was an attempt by white men to get up a revolt among slaves, in which the slaves refused to participate. In fact, it was so absurd that even the slaves, with all their ignorance, saw plainly that it could not succeed.”