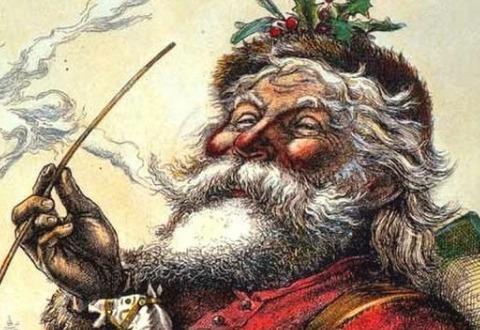 It’s difficult to write about the Civil War at Christmas time, since during that time of war, battles and skirmishes, most folks just did not sit down and commit their thoughts of Yuletide observances to paper and ink, that is if they had ink.  But Christmas was celebrated to some extent both in the North and in the South.

However, you can never talk of the Civil War and Christmas without bringing up the name of Thomas Nast, who was a newspaper cartoonist and a rabid Northerner. It was Nast to whom we owe the word-picture and the actual drawing of Santa Claus, which flowed from his prolific pen.

He published his first Christmas-related cartoon in “Harper’s Weekly” during Christmas,1863, showing a bewhiskered gent passing out gifts to Union soldiers. A couple of fairly young looking boys are pictured on the floor, opening boxes.

In 1862, President Lincoln visited injured Union soldiers at various hospitals, and many would find a gift bearing a card that said “From Tad Lincoln.”  Even as a young child, Tad, the President’s son, had been very moved at seeing the wounded soldiers when the President took him on one of his trips to a hospital. This scene, with a little artistic license, appears in the recent movie, “Lincoln.”  Most of these gifts Lincoln gave to the soldiers were books and items of clothing.

Though many in the South would argue this, it has been said historically that the best gift Lincoln ever received was on December 22, 1862, when General William Tecumseh Sherman announced the capture of Savannah, Ga. The vitriolic and aggressive Sherman doubtless felt he had found the perfect gift for Lincoln.

On the Rebel side, the Christmas week of 1862 saw Confederate General John Hunt Morgan on his famous “Christmas Raid” through Kentucky, as he spent the entire day destroying every bit of the improvements and track of the Louisville and Nashville Railroad, which ran from Bacon Creek (now known as Bonnieville, Ky. and today as a well-known speed trap) to Lebanon Junction.

“Union neckties” were made of twisted rails, and by the time the troops known as Morgan’s Men were finished, a train could not get through Kentucky, which was his goal with 35 miles of track lying in ruins. If that were not enough, Morgan also destroyed the bridge at Bacon  Creek — for the second time!

At Christmas time in 1863, the Union forces destroyed the Confederates’ salt works at the small area of Bear Inlet, N.C., fairly near Swansboro and the area, which would later be the Marine training ground at Camp Lejeune.

The larger episode occurred in December of 1864, when the entrenched Confederate forces were able to hold off a massive assault by the Union with sixty warships on Fort Fisher, a one-sided affair if ever there was one. Little did the combatants know on that fateful occasion that in a mere six months the War would be all over.

In what had to be almost an early version of the Charlie Brown Christmas tree, the men who were not actually fighting tried to make the Christmas spirit more tangible by decorating a little evergreen with pieces of hardtack and salt pork tied to its branches. One has to imagine that the birds and other varmints probably enjoyed it more than the men did. Obviously the Northern troops fared better on the food than those in the South. One captain from Massachusetts was said to have supplied his men with turkey, oysters, various pies, and apples.

The story is also told of 90 some Union soldiers from Michigan who decorated pull carts, and even simulated reindeer horns by tying tree branches together for the mules, and filled them with various items of food and other supplies which they handed out to poor Georgia civilians, who were sorely in need of sustenance.

One of Nast’s most poignant drawings was depicted in two circles: in one a woman is shown praying for her husband on the battlefield. Its twin has a picture of a soldier on the battlefield, as he similarly prays for her. This drawing appeared in 1862; the following year, Nast’s Christmas cartoon showed the couple back together again.

The sweet and soulfully sad pictures from 1862 from Nast were nothing like the drawings he did for Christmas 1865.  The one he did for “Harper’s Weekly” had a picture of Santa Claus.

However, the drawing also included General Ulysses S. Grant, standing with the severed heads of several Confederate generals around his feet, about as gruesome and gross a representation as one could imagine.

And so through time immemorial, people around the world, including our armed forces, have found ways to still celebrate the birth of Christ, keeping Christmas as they would have if they were at home. Children in those days received much less than our spoiled little darlings of today could imagine, with today’s average middle class home stuffed with enough toys to outfit a toy store.

Many children’s gifts back then were homemade. Even a young girl could be made happy by a new bit of lace or ribbon for her hair, while young boys saw their little wooden wagon get refurbished and ready to roll again.

Gifts were more necessities than luxuries, particularly in the overwhelmed South where the adults were lucky to have food, much less anything extra for their children.

Interestingly enough, before the War, Christmas was a happy time for the slaves  on the normal Southern farm or plantation.

Masters and mistresses saw to it that each man or woman had a new suit of clothes or dress, suitable for work, of course, and all day the workers would stop by the house to greet the owners with “Christmas gift, Massah” and receive their gift in return. Work stopped and casual play and entertainment took over.

And as Tiny Tim would say, “God bless us, everyone!”