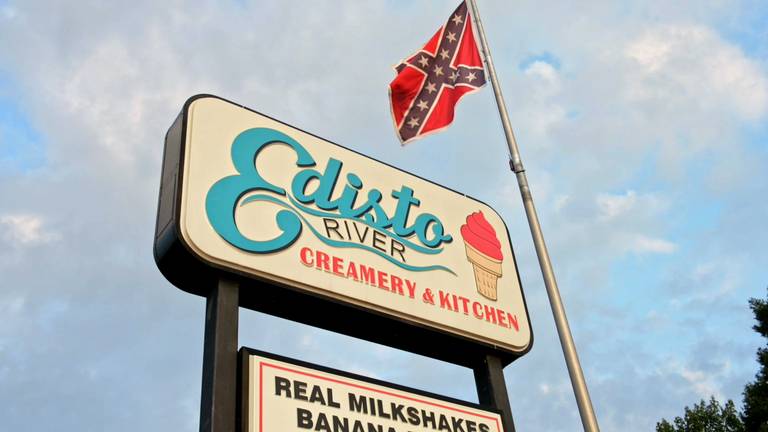 Tommy Daras is not a sentimental man in the documentary “Meltdown in Dixie.” He drives dragsters, smokes cigarettes, curses with ease, and simply wants to make some money at his Orangeburg ice cream shop.

But the filmmakers capture his emotional fight to take down a Confederate flag on a sliver of property next to the Edisto Creamery. The tiny plot is owned by the Sons of Confederate Veterans and was deeded to them by Maurice Bessinger, an unabashed racist and barbecue restaurant owner.

Many people incorrectly assumed the flag and the property it flies on belong to Daras. He has to constantly ward off accusations of being racist, which weigh heavily on him.

Started in 2017 and completed in February, “Meltdown in Dixie” follows Daras’ legal challenges with lawyer and state Representative Justin Bamberg to take down the flag while the Sons of Confederate Veterans and their leader defend its placement.

South Carolina and some national press covered Daras’ case that lasted from 2017 to 2019.

“Meltdown in Dixie” premiered Tuesday and is streaming for free through the WORLD Channel the entire month. It is also available through Topic Streaming. The film, partially funded by the South Carolina Humanities council, won best short documentary at the Big Sky film festival in February, making “Meltdown in Dixie” eligible for an Academy Award nomination.

In the documentary, Daras recalls a moment in 1968 when the Black Panther Party showed up at his father’s grocery store near Washington, D.C.. Riots were about to break out, Daras said, and the Panthers told his father they didn’t want him or his people to get hurt. So Daras’ father, known as Big John, left the store. That night, the family got a call that the store had burned down.

His father cried outside the ruined store. Black people began to gather, and a young Tommy got scared. But his father told him not to worry, that he knew the people. A woman approached Big John and paid off the debt she had at the grocery store. About $12, Daras remembers. A line of people formed and they all gave Tommy’s father money.

“And we left and my father never had a racist bone in his body,” Daras said. “I wanted people to know that I’m not no racist [expletive] standing down there holding that flag” next to the business parking lot.

Getting the kind of personal truth like Daras shared was one part of making the film. But Emily Harrold, the documentary’s director, wanted to give a full view of the controversy around the flag and the ice cream shop. That meant she and her crew had to do hours of interviews and filming with Buzz Braxton, the head of the Orangeburg area Sons of Confederate Veterans, a group that the Southern Poverty Law Center labels a white nationalist organization.

Putting Braxton and his group on camera meant Harrold could be accused of giving white nationalist views a platform. She heard that critique in early screenings. But she pressed forward with releasing the documentary the way she envisioned.

Harrold, an Orangeburg native now residing in New York, wanted to show “the motivated reasons people are making these choices,” she said. “How can I reveal that in the film in a way that, you may not agree, but you understand what the motivating factors are?”

For a person in charge of a mostly cloistered group, Braxton was fairly easy to get on camera, Harrold said. She believes he was tired of giving “no comment” and wanted to express his perspective. In the film, he doesn’t hold back much.

Confederate General Robert E. Lee “is probably the greatest man to walk the face of this Earth,” Braxton says in the film.

“A lot of people don’t understand the Sons of the Confederate Veterans. You got people who the first word out of their mouths is ‘racist,’” he says. “The Confederate battle flag is the soldiers’ flag, our ancestors. That’s why we’re so proud of it.”

He also defends slavery in the film and admits to using racist slurs for Black people and says he won’t apologize for it.

Harrold wanted people who might not be exposed to that kind of speech to hear it.

After seeing the film, Braxton approved of his portrayal, telling the Associated Press, “it was about [as] fair as I think it can be.”

The film’s producer and cinematographer, Seth Gadsden, said he believes the ascension of Donald Trump in 2016 played a role in a devout Confederate flag supporter expressing views to a New York based filmmaker that typically wouldn’t get the time of day.

Some people on the far right who are often accused of racism “were emboldened to speak out and be truthful in their perspective,” Gadsden said.

“We thought there was enough in the way we put this [film] together to get a sense of who Buzz is and who is behind these symbols” like the Confederate flag in Orangeburg, he said.

The film tells the story as it unfolds. Cameras are rolling as Daras and Bamberg argue to the Orangeburg City Council that the thin portion of land owned by the Sons of Confederate Veterans where the Confederate flag flies is zoned for commercial use. The flag has no commercial purpose so it should be taken down, they argue. They fail to win council over and the flag stays up. But the story doesn’t end there.

At times, Daras was demoralized during filming and didn’t want to be interviewed, Harrold said. But she and her crew were always able to bring him back into the film and keep him talking about a disheartening subject.

An undercurrent in the film is people’s desire to leave racially charged issues unspoken. They don’t want to speak about them because they feel helpless to find solutions or they want to deny the racism that bolsters their positions.

After discussing the 1968 Orangeburg Massacre, in which police killed three Black men and wounded 28 others at the then-S.C. State College in Orangeburg, Bamberg says, “It’s kind of like the shadows of a dark era are constantly on you. I think some people don’t want to think about the Confederacy or what it means.”

“This is something we don’t like to talk about yet people were willing,” she said. “I’m hopeful that the film is the starting point for a much larger, much needed conversation.”