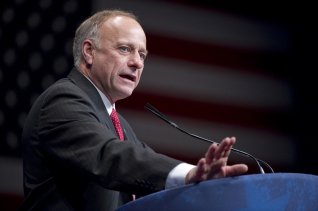 Republicans continue to argue about whether the party needs to take steps to prevent the next Christine O’Donnell, Sharron Angle, Todd Akin and Ken Buck, as well as how it might do so.

Those inept and seriously flawed candidates lost races that other Republicans would have won easily.

The new group is aiming to defeat candidates who are viewed as less-electable, such as King, above. Chris Maddaloni/CQ Roll Call File Photo

The new group is suppose to be a counter-weight to the Club for Growth and the Senate Conservatives Fund, both of which helped fund some of the problematic candidates

But announcing the formation of the Conservative Victory Project in The New York Times, a symbol of the elite, northeastern establishment, only gives ammunition to the groups it is seeking to combat since part of its appeal with supporters relies on something close to paranoia about the power and goal of the “establishment.”

The truth is that while most insiders agree about the problem, nobody has come up with an easy solution. And that’s because there isn’t a quick fix.

It is both true and obvious that not all uncompromising conservatives lose general elections and not all pragmatic conservatives win them. But in competitive contests and during years without a huge pro-Republican wave, the quality of candidates definitely matters. And ideological positioning is only one part of what makes a “quality” nominee.

Texas Sen. Ted Cruz, a Club for Growth and tea party favorite who demonized conservative Lt. Gov. David Dewhurst as a moderate in a 2012 GOP primary, happens to be smart and politically savvy. The same goes for Sen. Patrick J. Toomey, R-Pa., a former president of the Club for Growth who once supported moderate Sen. Arlen Specter’s bid for re-election. Toomey also was helped in his Senate bid by the GOP wave of 2010.

But some “anti-establishment conservatives” obviously lacked the agility to be strong nominees, while others had such out-of-the-mainstream values or such a misunderstanding about how a candidate should act — or what qualities voters value — that they kicked away almost certain victories.

Again, plenty of “establishment conservative” candidates have run mediocre campaigns (Montana’s Denny Rehberg and North Dakota’s Rick Berg are often mentioned) and lost. But they certainly had a better chance of victory and were less likely to make silly mistakes during their campaigns than were the O’Donnells, Akins and Bucks of the world.

But if American Crossroads shouldn’t be announcing its plans in The New York Times, what should it be doing? For many Republican strategists the answer is clear: recruiting better candidates, getting conservatives with broad appeal to run better campaigns, and making sure that multiple candidates don’t divide the mainstream conservative vote and allow a much weaker “anti-establishment” candidate to win the nomination.

American Crossroads also should have worked with others to set up a new, independent group to support and give cover to pragmatic conservative candidates. Led by a couple of well-credentialed conservatives who understand the party’s problem, the group could prevent the Club for Growth, Rush Limbaugh or The Heritage Foundation President Jim DeMint from deciding who is a conservative and who isn’t.

Doing all of this, of course, would not have guaranteed that Jane Norton would have defeated Buck for the Republican Senate nomination in Colorado in 2010, or that businessman John Brunner would have defeated Akin in Missouri’s GOP Senate primary last cycle.

There are no guarantees in politics.

But while creating a high-profile fight with “anti-establishment” groups, as American Crossroads has done, may help with fundraising and mollify supporters, it will turn out to be counterproductive because it will only enrage and empower the very people that American Crossroads is trying to marginalize.

That is exactly what has happened in Iowa, where GOP Rep. Steve King, a conservative whose record and tone make it more difficult to win a statewide race, has already attacked Rove so as to mobilize state conservatives behind the congressman’s potential Senate bid.

Winning a primary or two or seeing an anti-establishment conservative lose another winnable race isn’t likely to end the Republican fratricide. The Club for Growth’s funders aren’t easily convinced that they are misguided, and DeMint won’t change his mind about politics anytime soon.

Pragmatic conservatives in the GOP might actually be better off trying to kill the conservative troublemakers with kindness and to woo potential critics through inclusion, as many incumbent members of Congress have done quite successfully.

Ultimately, the Republican Party’s problems go back to its base voters, who participate in primaries and nominating conventions. Many of them are so blinded by their anger toward President Barack Obama, the national news media and their own party leaders that they are willing to nominate the most conservative candidate in a primary, no matter how limited his or her appeal in a general election.

And for party strategists, there is no easy solution to that problem.