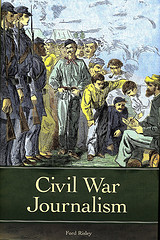 New technologies and a growing demand for information during the US Civil War forever changed the nation’s press, according to a book by journalism professor Ford Risley.

It was absolutely an important moment in the history of the press,” says Penn State’s Risley. “The practices, technological development you begin to see during the war—the importance of the telegraph, the use of illustrations, for example—and the growth in demand for newspapers, so many of these things came together during this remarkable and tragic event.”

"The people were clamoring for news about the war. Almost everyone knew someone who was fighting, whether it was a family member, or a friend, or a neighbor," says Ford Risley, a professor of journalism at Penn State. (Credit: Rennett Stowe/Flickr)

The demand for newspapers in both the North and South soared during the Civil War, says Risley, whose book, Civil War Journalism (Praeger, 2012), was published this fall.

“The people were clamoring for news about the war. Almost everyone knew someone who was fighting, whether it was a family member, or a friend, or a neighbor.”

While the Southern press was not as prepared to face the rising demand for war reporting as the North, the need for that information in the Confederacy was perhaps even more vital, Risley says. As Union troops invaded the South, editors and journalists strained to provide information to readers on troop movements and possible targets.

“Besides Gettysburg and Antietam, the war was largely fought in the South,” Risley says. “So the people in the South obviously had a real stake in the war.”

This demand for information continued after the war and pushed more newspapers to broaden their readership by offering more objective reporting. “America really became a nation of newspaper readers during the war.”

Photographs and illustrations were another media innovation that grew in prominence during the Civil War. Photographers, such as Alexander Gardner, and illustrators, such as Alfred Waud, gave the public a more visual and often more graphic portrayal of war.

The telegraph, which was used heavily by the press during the Civil War, had a long-lasting effect on journalism. Since telegraph operators charged by the word to transmit stories over the wire, reporters tried to prioritize facts and write more succinctly.

“While I think that the idea that the use of the telegraph created the inverted pyramid style of news writing is an often overstated, you do begin to see that reporters are beginning to write more concisely during the war,” Risley says. “They paid telegraph rates, so, the fewer words, the less expensive.”

The book offers insights into both the Northern and the Southern press in one volume, which helps to show the similarities and the differences between the two presses, Risley says.

“Obviously, the Northern press was far ahead of the Southern press in terms of technology and experience.”

Reporters from both sides of the war had somewhat similar experiences dealing with censorship. With a lack of guidelines on how the military would work with the press, both Union and Confederate governments and armies restricted reporting and closed newspapers, causing tension with the press.

“Sometimes the government had a point because military secrets were revealed by reporters,” says Risley. “But at the same time, the censorship often was arbitrary and uneven.”

The Civil War also showed officials how powerful the press could be in shaping public opinion. The government officials often struggled with finding an even-handed approach in their handling of the press.

“Abraham Lincoln recognized that the press played a role in public opinion and he used the press effectively,” says Risley. “But, he wasn’t afraid to shut down newspapers, something that would not have been acceptable today.”