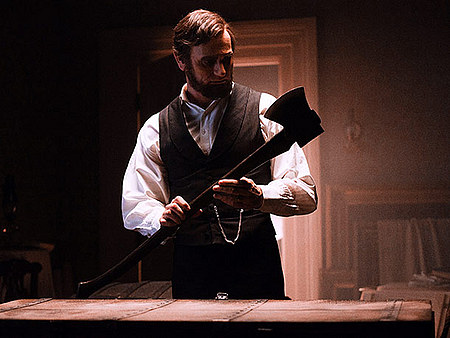 If you take cheese and form it into a ball, you got yourself a cheeseball.

If you take a historical figure, add a cheesy conceit and proceed to make a movie out of it, it should come as no surprise to anyone that what you get is a cheeseball of a movie. And terming this movie simply “cheeseball” is being kind, let me tell you.

It’s not that the idea of Abraham Lincoln as a secret vampire hunter couldn’t work in the strict sense that a cheeseball by nature can’t be anything other than a ball of cheese.

It’s just that it didn’t, and egregiously so.

Pity the fate of our sixteenth president in Abraham Lincoln: Vampire Hunter, whose assassination at the end of the film is both a mercy to himself and the audience. Though we’re cruelly teased with the idea that just before Lincoln left the White House to appreciate the genius of Our American Cousin he is offered immortality by a vampire friend, thank God for His little mercies that Lincoln is allowed to die and exit the farce.

I understand that this film is an adaptation of a successful book by Seth Grahame-Smith, who also penned the screenplay. And while I use the term “successful,” I only do so in relation to sales figures, because besides the author’s immediate family, I cannot conceive of it generating any serious, hardcore fans, the kind who invest themselves deeply and emotionally in the world and characters created, either as a work of literature or even that of fantasy fiction, that most forgiving of genres the kind audiences of which will gleefully suffer near-toxic foolishness without complaint in order to cop the most fleeting of fixes for their fetished fandom.

This world of this movie, however, fails so profoundly in so many ways that there simply is no way any lover of either the historical Abraham Lincoln (mostly old men) or vampires (mostly young girls) could be satisfied, and that’s saying something because there are innumerable legions of both who will go bananas at most any effort to describe the object of their affection and who will consume voraciously anything remotely resembling authentic storytelling. Here, however, there’s not enough real history for the former, not enough bare chests for the latter. They both leave the theater depressed from want of more; everyone else leaves depressed for want of less. All are out ten bucks, and all are tortured without restraint, because from premise to plot, from execution to action, this film is a colossal swing and a miss, a vapid stitch, a frankenstein of a story that’s dead on arrival with holes big enough to march the Confederate Army through.

Like most bad ideas throughout history, the problem with this project began at conception. At its most hopeful, the entire enterprise of pairing Lincoln with vampires promised little more than an amusing exercise of an idea and delivered even less, with its clumsy author unable to deliver any literary sea legs beyond playing a bar stool “what if…” game to its quickly exhausted conclusion, much the same as imagining George Washington as a werewolf or Pride and Prejudice filled with zombies. (Wait, what’s that? The same author actually penned Pride and Prejudice and Zombies? Seriously? Good God Almighty, if only Jane Austen could rise from the dead and feast on brains, I have a nomination for the first victim, because schlock such as this deserves an epic screen kill.)

But enough of the death of literature, let’s look at the death of a movie; specifically, this one. Abraham Lincoln becomes a vampire hunter due to the following series of events: While just 8 years-old, his father attacks his employer for whipping Lincoln’s friend, a young black boy named Will Johnson (the pair’s friendship is a historical fact). This intervention proves unwise, because he is immediately fired. Making matters worse, the elder Lincoln owes a large debt of unknown origin to his employer, a debt he had been working off but now must pay in full. Still full of anger, Lincoln Senior also unwisely refuses to pay the debt to the man as demanded. This leads the employer to pay a visit to Lincoln’s mother in the night and poison her in revenge. From his bed, Little Abe sees this and vows revenge.

Fast forward a decade and Lincoln finally has mustered the courage to take the revenge he’s been planning for years by getting drunk at a bar. Long story short, he shoots his mother’s killer in the eye, not knowing he is a vampire, and is subsequently beaten-up by the vampire. He is saved from death by a man he met at the bar whom he subsequently learns is a vampire hunter. Upon learning this, Lincoln decides to devote his life to the killing of vampires, and the man promises that if he’ll kill the vampires assigned to him, eventually he’ll be allowed to kill his mother’s killer and get his revenge.

So, Lincoln now hates vampires and is perfectly willing to kill them immediately and in whatever gruesome fashion the scene requires. Having been sent to Springfield, which apparently is lousy with vampires, Lincoln takes a job as a store clerk and studies law by day so he can slay vampires at night, the identities of whom are supplied by his friend through the mail. Tedium ensues, with the exception of the appearance of an entirely ahistorical version of Mary Todd Lincoln, here imagined as feisty, smart and a hottie (though she is shown as slightly interested in shopping).

As they court despite Lincoln’s supposed oath or promise or something not to take a love interest and complete with a groan-inducing love triangle with Stephen Douglas, he begins to fill his own vampire graveyard with more or less prominent citizens (we witness the murder of a pharmacist and a blacksmith), the loss of whom local law enforcement seems to have no interest whatsoever in investigating. Even when he brags to Mary of killing five – no, wait, six! – vampires thus far, the normally clever girl can’t make the logical connection to the mysterious disappearance of five – no, wait, six! – of the town’s citizens as reported prominently on the front page of the local paper we’re shown (at least journalism behaves in the movie as it would in real life).

After finally getting the OK to kill the vampire who killed his mother (and learning his vampire hunter teacher is himself a vampire), he gives up his night job to pursue a career in politics, and inexplicably the very vampire coven who wanted him dead in the worst way for murdering so many of their kind suddenly decide to give up the chase completely once he makes this decision. <Sigh.>

This segues to the one reason I wanted to watch this movie in the first place, a hope that was sprung when I saw a preview for it featuring state-of-the-art CGI employed to depict Civil War battle scenes. This does happen, but in a sequence that lasts maybe two or three minutes, including a scene of the firing on Fort Sumter in Charleston that’s on screen for about three seconds. It’s far too short a sequence for what could have been a far more interesting development of the plot.

The climax of the movie comes at Gettysburg, where we’re told that the entire vampire race in North America have been summoned to the Confederate cause (something about needing the blood of slaves) despite having been so plentiful and comfortably placed in anti-slavery cities like Springfield throughout the North and whole of America. Whatever.

Day One of the battle goes to the undead, and after amazingly marshaling all the silver tableware of Washington, D.C. (yeah, good luck getting people to part with that for, what was it again? To make vampire bullets? I’ll be right back with that for ya!), Day Two of the decisive battle goes to the newly equipped Union forces. Also, Mary Todd Lincoln gets to shoot the evil vampire queen who killed their son. I’m leaving out what I assume the filmmakers considered the movie’s great payoff, a long, expansive train sequence complete with a burning bridge, vampire killing and whatnot, but it was boring visually and thematically, so there.

The movie ends, as I’ve already spoiled, with Lincoln heading out to Ford’s Theater having turned down an offer of immortality. Sadly, we don’t even get to see any of this truly climactic moment, as the author neglected what could have been a golden opportunity for both Confederates and vampires to get their final revenge on Abraham Lincoln, vampire hunter.

I pray that the author resits the urge to revisit both this scene and any an all future contrivances to pollute either great personages of history or great works of literature with movie monsters. There’s such a thing as standing on the shoulders of giants, and there’s such a thing as slicing their hamstrings for pleasure, mounting their helpless bodies and posing for a Polaroid. This movie has none of the former, all of the latter and appeals only to those people for whom the title alone can titillate. That it fails, at the end, successfully to seduce even them is perhaps the movie’s only realistic plot twist and should stand as its most accurate and unbiased historical judgment.