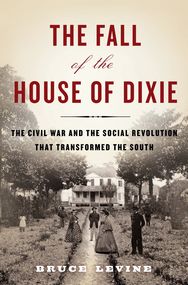 As the world becomes more connected through the Internet, it’s becoming easier for scholars to turn up new data about the Civil War, on which far more books have been written than about any other event in U.S. history. Libraries and museums are increasingly putting new information online, and this is helping scholars turn up new data as well as question long-held views. For example, it had been generally accepted that 618,222 men died in the conflict. Just last year, new research recalculated that appalling toll using scientific methods — and found it was likely much higher at 750,000. Dozens of new books come out every year, and 2013 will be no different. We examine three of the latest.

‘What the Yankees Did to Us’

Solomon Luckie, a well-known free African-American barber, was killed in August 1864 by one of tens of thousands of Union artillery rounds fired into Atlanta’s still bustling downtown area, weeks after Union forces had defeated Confederates in a series of bloody battles on the outskirts of town.

"What the Yankees Did to Us"

The shell that killed him ricocheted off an iron Atlanta Gas Light Co. lamppost, which stands today in Underground Atlanta on the very spot it was located on Luckie’s unlucky day.

No one knows where Luckie is buried, but his remains likely lie in Oakland Cemetery, known as City Cemetery in 1864, when it was a very active place, even in the thick of shelling, says Stephen Davis in his new book, “What the Yankees Did to Us: Sherman’s Bombardment and Wrecking of Atlanta” (Mercer University Press, $35).

The richly documented tome, published by Mercer University Press, is breathtaking as a scholarly work, so meticulously researched that it can only be objective — which had to require extraordinary effort by Davis, who clearly feels Sherman was far too ruthless.

It is based on hundreds of eyewitness accounts recorded in letters and diaries by soldiers on both sides, plus women and children. He also cites reports by dozens of newspaper reporters from around the South.

Davis writes that Sherman didn’t care whether shells killed or wounded innocent civilians, and they did, including women and children. After Rebel soldiers had been defeated in battle, civilians endured 37 days of relentless shelling, holed up in caves, basements and “bombproofs.” Soon after Sherman’s men marched into the city, he ordered it wrecked and burned.

Thanks to Sherman, Atlanta is considered one of the most burned cities in U.S. history, along with Chicago and San Francisco.

Occasionally, Sherman’s “calling cards” are still found. An unexploded shell was found in June 1994 when archaeologists excavated the area where the old Rich’s Store for Homes had stood. It weighed 12 pounds, was 11.78 inches around and contained 15 marble-sized lead balls designed to rip through human flesh — and fell in a residential area.

Davis, 64, who has been working on the book off and on since 1990, says he uses the word Yankees as Southerners did during the war. “In writing this book I wanted to return to the time of the war and re-experience what my people and the city had endured,” he said. “I wanted to shed all academic filters and feel what my city endured.”

The author says Sherman “should be called out” for his merciless conduct, citing a telegram to then-Secretary of State Edwin Stanton asserting that “there is a class of people, men, women and children, who must be killed or banished before you can hope for peace and order.”

The book contains dozens of quotes from Sherman calling for the studied destruction of the city. People need to know, Davis writes, that the shelling of Atlanta “was arguably the bloodiest urban barrage in the Civil War.”

Sherman was often quoted as saying war is hell. Davis’s book shows in chilling detail that, in Atlanta, it surely was.

‘The Fall of the House of Dixie’

Some scholars still dispute that slavery was the main cause of the Civil War, in part because only 25 percent of Southerners owned human beings. But those classified as “planters” owned 20 or more, and some hundreds or thousands, and it was this elite class that wielded the most power.

They pushed hardest for secession and ultimately undermined the fledgling Congress of the new republic, writes Bruce Levine, a University of Illinois historian and author of the new book, “The Fall of the House of Dixie: How the Civil War Remade the American South” (Random House, $30).

"The Fall of the House of Dixie"

When the powerful men — accustomed to controlling armies of slaves — left to join the fighting, it became more difficult for those at home to control the crumbling economy, as well as workers in the field, once they’d sensed freedom was coming.

The Confederacy cracked from the inside, says Levine, whose book was based on “30-some odd years of research and teaching.”

By late in the war, increasing numbers of Southerners saw the struggle as a “rich man’s war and a poor man’s fight,” which was especially true since some slave owners were exempt from the draft. Such dynamics, he asserts, made slavery increasingly untenable, even when the South seemed to be winning.

In the end, it was the “arrogance” and self-delusion of Southern “masters” who wrongly felt that a war to defend slavery could end it faster than a continuation of the tense peace that existed before 1860.

It was more difficult to find information for essays that go with each of 77 images African American soldiers.

“The book took four years, about the same time to fight the war,” says Coddington, assistant managing editor of at the Chronicle of Higher Education.

Like the previous two, the book is packed with small, scratchy photos, but this one focuses solely on African Americans — infantrymen, cooks and teamsters.

His essays are full of detail. For example, Sgt. Maj. Lewis H. Douglass, the son of escaped slave and famed abolitionist Frederick Douglass, was a member of the 54th Massachusetts Infantry, made famous in the movie “Glory.” He cheered on his comrades during the doomed charge.

“I think it would be next to impossible to research this kind of book in any other time than the Internet age,” Coddington says.