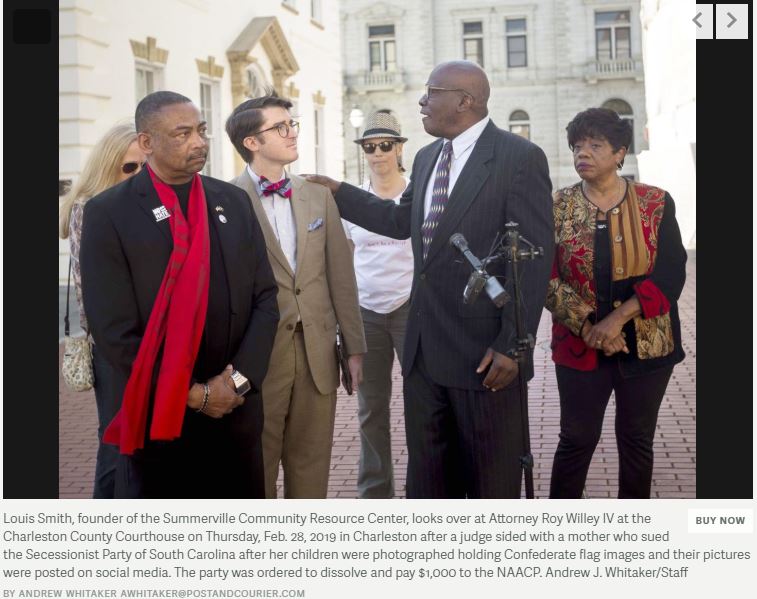 The S.C. Secessionist Party has lost its cause.

A circuit judge on Thursday effectively ended the organization by approving a settlement involving the party and a North Charleston mother who is black. She sued the secessionists over Confederate flag images they had provided her children at The Battery in Charleston. The photos of her children were posted on social media.

Judge Alex Kinlaw Jr. approved the agreement in Charleston County court, ordering the Secessionist Party to dissolve all of its online assets and organizing power, and pay $1,000 to the Charleston NAACP.

Should the party ever reactivate, the party would have to pay $1 million each to the mother and two children.

Kinlaw, the first African-American circuit judge elected for Greenville, expressed frustration that “we are still dealing with that kind of stuff” in 2019. The judge encouraged people to love each other.

“If we just love one another, all of this stuff will go away,” he said.

Community leaders applauded the court’s decision, citing it as a step forward in a city known for its past ties to slavery and the Civil War.

“This is a big day for our community, for South Carolina as a state and for the nation,” said Charleston attorney Roy Willey IV, who represented the plaintiffs. “We have no doubt that while we have financially bankrupted a morally bankrupt organization, hate still exists. People will still appear with hate in their hearts and with the flag. But today is a very big step forward in the right direction for our community.”

According to the lawsuit, filed by Alicia Greene, the Secessionist group was holding one of its many pro-flag rallies on June 24, 2017, to spread “the love to All of our Southern Brothers and Sisters,” an invitation included in the court document states.

It was the same day that Secessionist Party founder James Bessenger, who was named in the lawsuit, was struck by a car during the event.

First responders, including a firetruck, showed up, drawing the children’s attention. The family had been visiting White Point Garden for a picnic.

At one point, the children got away from the mother. Later that day, photographs began to appear on Facebook of the two children holding the Confederate flag images.

Greene’s purpose in filing the suit was to “make sure it never happened to anyone else,” according to the settlement.

The attorney for the Secessionist Party waived appearance and consented to the terms of the settlement.

In January, months after the suit was filed, Bessenger announced the 25,000-member group would dissolve. While he thought that people who waved the flag with racist motives were in the vast minority, and that most people were genuinely interested in the historical aspects of the Confederacy, he is now convinced that is not the case, court records said.

Community leaders described the party as a hate group and said they would continue to combat racism, classism and sexism.

The NAACP attended the hearing in support of the mother’s suit. They did not request the monetary donation.

“We continue to fight,” said Dot Scott, president of Charleston’s NAACP. “We send a message that hate cannot exist.”