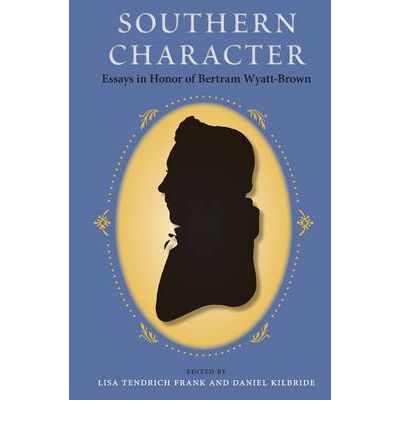 The fifteen essays in this collection stem from a conference organized in 2005 in honor of Bertram Wyatt-Brown, who held the Milbauer Chair in History at the University of Florida from 1983 until his retirement in 2004. Wyatt-Brown’s influence on the fields of Southern cultural and intellectual history, as well as U.S. religious history and gender studies, has been profound.

Southern Character is a fitting tribute to this influence, as well as his generosity as a scholar and teacher. The essays were all penned by former students, except for the opening piece, a loving personal and intellectual biography written by his friend and colleague, Charles Joyner. The collection as a whole, however, does not ruminate on Wyatt-Brown’s scholarship, but rather is meant to showcase his impact as a scholar and as a mentor in the profession. For that reason, the essays, which address a wide array of topics, many of which only indirectly relate to Wyatt-Brown’s work, will be of interest to scholars in a number of fields and sub-fields.

The diversity of the collection reflects the expanse of Wyatt-Brown’s intellectual interests. As Joyner points out, he read deeply into the fields of anthropology, literary criticism, psychology, and theology, and wrote numerous books and articles on slavery, abolitionism, southern literary culture, and the southern psyche. He is best known for his seminal book, Southern Honor (1982), which examined the persistence in the Old South of honor, that social concept upon which a man’s public identity and therefore his self-worth was based. In that book and more recently in The Shaping of Southern Culture (2001), Wyatt-Brown expounded on the ways in which honor gave shape to southern conceptions of manhood, race, violence, politics, war, and religion.

Several essays in this volume take up the issue of southern honor, bearing the stamp of their mentor directly. Daniel W. Stowell evaluates honor’s impact on Abraham Lincoln’s personal and political life. He argues that honor shaped Lincoln’s values in his early years, but as his legal career flourished, he became invested in the law to settle disputes, which ultimately led him to underestimate the honor-fueled southern outrage that precipitated secession. Lisa Tendrich Frank looks at how the conception of honor informed white elites’ responses to Sherman’s March.

To Southern white women, the ransacking of their cities felt like a personal assault upon their virtue, as union soldiers entered and rummaged through their private spaces. Unable to protect their women from this humiliating attack, Southern men felt dishonored. These essays, while provocative, unfortunately exemplify one of the dangers of using honor as an explanatory concept: employed too loosely and defined too broadly, it can lead to reductionist arguments.

Christopher J. Olsen employs the concept more successfully in an essay that illuminates the role that honor played in antebellum Southern politics. He argues that because political parties were weak in rural areas, politics was more personal, operating not through institutional bureaucracies, but “within networks of friends, neighbors, and extended kin” (45). Manhood, in that context, denoted not only power or mastery over others, but also signified one’s obligations and duties to others. A man’s reputation within these networks—his honor—thus mattered to his political fortunes more than it might in party-driven environments. In the vein of Stephanie McCurry and others, Olsen persuasively uses culture and gender to explicate electoral politics.

The essays that address various aspects of Southern religiosity are also some of the strongest in the volume. Randall Stephens examines Wesleyan missionaries and their thwarted attempts to spread the holiness movement in the antebellum South. Their adherence to abolitionism was bound up with their belief in spiritual perfectionism, which led white Southern Christians to reject and persecute them. Stephens carefully shows that Southerners felt threatened by Wesleyan holiness because of their defensiveness about slavery; theological views became inseparable from the politics of slavery.

Stephens thus furthers our understanding of why southern Christians rejected the liberalism of northern Protestantism, with its focus on spiritual and social progress. Glenn Crothers’ essay on antebellum Quakers in northern Virginia pairs well with Stephens’s study. Although their anti-slavery views set them apart from their neighbors, Crothers argues that Virginian Quakers adhered strongly to a southern identity, suggesting that pro-slavery views did not a “Southerner” make.

His evidence does not always support his argument, but he does disrupt any monolithic understanding of antebellum Southern culture. Jeffrey Anderson similarly explores Southern religious diversity in an astute historiographical exegesis of two influential studies of Voodoo—or Hoodoo—culture: Robert Tallant’s 1946 Voodoo in New Orleans and Zora Neale Hurston’s 1931 essay, “Hoodoo in America.” His essay challenges recent scholarly assessments of these works and, in doing so, questions many romantic myths that surround Hoodoo.

Finally, Andrew Moore offers a fascinating look at anti-abortion politics in the South. He shows that Southern Baptists initially had a nuanced view toward abortion, in part because they associated the pro-life movement with Catholics. He is most concerned, however, with the impact of the civil rights movement on both Baptist and Catholic struggles to determine “the proper role of faith and religious liberty in public life” (202).

Catholics developed the pro-life movement in strained tandem with the civil rights movement. On the one hand, they blamed the movement for a new emphasis on individual rights, over and against communal obligations, which they believed had led to the liberalization of abortion laws, culminating in Roe v. Wade. On the other hand, they appropriated the secular rhetoric of “individual rights” to make their case for the protection of fetal life, deflecting attention away from theological arguments.

Other essays address topics ranging from early Creek and Seminole identities to the public fascination with marriages between Chinese men and white Women in the Jim Crow South to the politics surrounding the proposed construction of the Cross Florida Barge Canal in the 1960s. The diversity of the collection means that there are no common topics, themes, or interpretations put forward. In that sense, it does not quite hold together. But it does signify Wyatt-Brown’s prodigious and lasting imprint on the field of Southern studies.

Amy Louise Wood is an associate professor of history at Illinois State University.