Unknown Faces of the Civil War 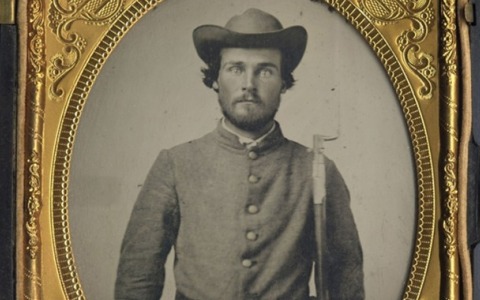 In the song “Home,” Phillip Phillips sings, “If you get lost, you can always be found.”

That’s exactly what the Museum of the Confederacy hopes.

Nine of its photographs from the Civil War are unidentified. The museum calls them “orphan images.” They were found on battlefields, or in the possession of dead soldiers, and were later donated to the museum.

Since the images were first publicized, the Richmond museum has fielded many phone calls and emails, but still has few solid leads. Psychics, dowsers and would-be family members wrote and called, but researcher Ann Drury Wellford said the names of the people in the photographs remain unknown.

For nearly 150 years, the faces in these cased images – as daguerreotypes, ambrotypes or tintypes covered in glass and encased in elaborate frames were known – have looked enigmatically out at the world. In addition to the two shown above and the two on the back page, the museum has five more orphan images. They are too fragile to display, but all can be viewed online at www.moc.org (click on Exhibitions, then Online Exhibitions).

Of the nine “orphan” images, this one comes closest to being identified. It is a small version of an ambrotype, which is a photographic image on glass.

A man sent Wellford another image showing a different little girl in the same pose and setting as the child with ringlets.

“We know that the photographer was named S.F. Sterlin and that he was based in Vermont,” Wellford said. “The image was found between a Union and a Confederate soldier on the battlefield at Port Republic. There were Vermont units in both skirmishes and engagements there.”

Port Republic is near Harrisonburg.

Private Thomas W. Timberlake of Co. G, 2nd Virginia Infantry, found this child's portrait on the battlefield of Port Republic, Virginia, between the bodies of a Confederate soldier and a Union soldier.

One of Wellford’s favorites is Unidentified Soldier No. 9.

The young man is wearing a militia uniform that gives no indication of what side he fought on.

The image is also on glass but much larger than the child’s picture. It was found on a battlefield near Richmond, and donated to the museum in 1936.

“Some of them have a very period appearance, but he is one of the faces that I see that is kind of timeless. You could see him at the gas station.”

Found on a battlefield near Richmond, Virginia, this photograph of an unidentified young militia lieutenant was donated to the museum in 1936.

A DEATH AT SHILOH?

The man in this image left it with Mrs. L.M.C. Lee of Corinth, Miss., the day before the Battle of Shiloh. He never came back for it.

“The presumption is that he was killed at Shiloh,” Wellford said. “He would have been somebody whose family didn’t know that there was a picture of him.”

Cased images were expensive to obtain during the Civil War, she said. Because they cost so much, they were handled carefully by their owners. How did they end up on a battlefield?

“I guess that means that somebody had carried them as a memento from home,” she said.

An unidentified soldier left this ambrotype of himself with Mrs. L.M.C. Lee of Corinth, Mississippi, on the eve of the Battle of Shiloh. The soldier never reclaimed the image and was presumed to have been killed in battle.

Pvt. Heartwell Kincaid Adams told the museum that he found this image in a haversack worn by a dead Union soldier at High Bridge.

A Union prisoner offered Adams money to share the food in the bag, and when the prisoner saw the picture, he said it was his dead brother’s child. He would not take the picture, nor would he tell the child’s name, according to museum records.

According to a story told by the donor, Pvt. Hartwell Kincaid Adams of the 3rd Virginia Cavalry, this ambrotype was in the haversack he took from the body of a dead Federal soldier at High Bridge a few days before Appamatox. A Federal prisoner in Adams' care offered $2 to share the food in the haversack. The prisoner recognized that photograph as his dead brother's child, but he declined to identify or take the picture.

“It’s a miracle that any of these pictures survived,” Wellford said.

“They were donated by people who had, more than likely, inherited them with a story attached. I think in most cases they were hoping that when they came into this institution between 80 and 100 years ago, that a family member would walk by and see them and maybe recognize them.”

So far, none has.

The Museum of the Confederacy in Richmond is trying to identify the subjects of these Civil War-era images. Do you recognize anyone? Contact researcher Ann Drury Wellford at dwellford@moc.org or at 855-649-1861, ext. 117.

A complete gallery can be viewed online .