Where Does the South Begin? 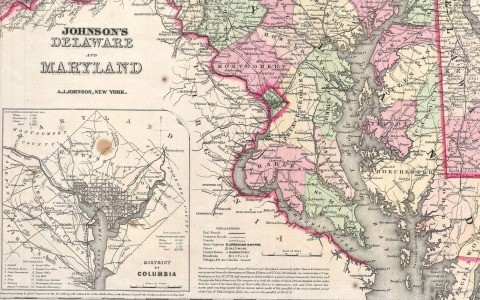 Yesterday I crossed the border from Pennsylvania to Maryland, and was greeted by a road sign for “The Mason-Dixon Line,” the historical demarcation between the American North and South. It’s a misleading distinction from a linguistic perspective, because one does not encounter Southern accents upon entering Maryland (at least east of Appalachia). So where does the South truly “begin,” accent-wise?

Dialecticians define the American South by its glide deletion (i.e. Southerners pronounce words like ‘ride’ and ‘bind’ with a monophthong, so they sound somewhat like ‘rod‘ and ‘bond‘). But do you cross an invisible boundary and find yourself immediately greeted by twangs? Or is this a more gradual process?

Living on the Atlantic Seaboard for most of my life, I find it nearly impossible to pinpoint where “Southerness” begins. My very rough impression is that the first hints of glide deletion start as far north as New York City*, but only before liquids like /l/ and /r/. This is pretty weak tea; after all, /r/ and /l/ often impact preceding vowels in unusual ways. And this type of monophthongization occurs in other accents we don’t associate with glide deletion.

Further south, around Southern New Jersey, Delaware, Maryland and some parts of the Philadelphia metro, I’ve noticed the occasional speaker for whom the glide starts to very slightly weaken before nasals like /n/ and /m/. But I still find the feature quite infrequent.

William Labov and team studied glide deletion in the American Midland in their Atlas of North American English. Their observations were similar to mine about the Mid-Atlantic: glide deletion in “Midland” areas of Kansas, Missouri, and Ohio tend to only occur before liquids and nasals. (With the exception of one speaker from Kansas who uses a monophthong in the word “five.”**)

It’s clear that you can’t simply drive southward and find increasing incidence of “Southernness” as you go. And as many Southern cities are developing markedly “non-Southern” accents, I’m guessing the North-South spectrum will become even more confusing.

*In dialects other than those influenced by African-American English, which is glide deleting throughout the US.

**Phoneticians will probably find that this suggests a connection between the glide deletion and the sonority hierarchy.

–Ben Trawick-Smith began his dialect fascination while working in theatre. He has worked as an actor, playwright, director, critic and dialect coach. Other passions include linguistics, urban development, philosophy and film.