Where does The South begin? 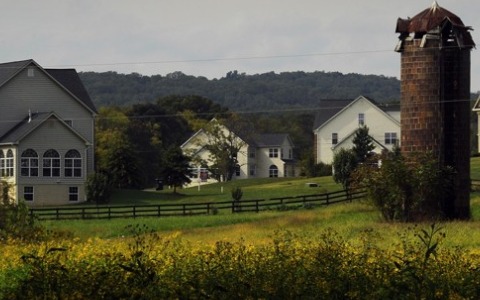 Gordonsville, Va. — There’s debate about where the South really begins. The Mason-Dixon Line? The Potomac? The Rappahannock? The “sweet tea line?” What’s certain is that, by the time you’ve reached David Lamb’s horse farm in Orange County, you’re there.

Oakland Heights Farm offers riding lessons and holds rodeos in the splendid heart of the Piedmont, on Route 15 a couple of hours southwest of Washington. Lamb is a Civil War buff who says his side lost, and grouses about prickly Yankees who swoop in and buy huge tracts of land and put up fences. Ask him what being southern means, and he says, “You can show up and sit on my front porch and have a glass of iced tea with me.”

Unlike some folks, he’ll talk politics with you. One day recently a fellow came down from Washington to ride, and mentioned that he was an economist working for President Obama. That riled Lamb. He would no sooner vote for Obama than wear a protective helmet instead of a cowboy hat.

“We’re bankrupt,” he told the economist, and proceeded to debate politics for an hour as they rode together through the woods.

Southern hospitality isn’t about to disappear, but the intensity of American politics in this election season can make for awkward encounters and tricky relationships, to judge by dozens of interviews in recent days along Route 15 in Virginia. The north-south scenic byway offers a transect of the cultural fault line between Northern Virginia and what might be more traditionally defined as the South.

Virginia has a long history as contested territory, and this year it’s a critical battleground state in the presidential election, with 13 electoral votes in the balance.

For a full generation, since the political realignment during the civil rights era, Republican presidential candidates had an apparent lock on the old Confederacy. But Obama, boosted by support in the booming Northern Virginia suburbs — known among some unreconstructed southerners as Occupied Virginia — won the state four years ago and has enjoyed a small but steady lead in recent Virginia polls.

As a general rule, the true South is more conservative, and more friendly to Republican candidates. The only catch is that the South is changing, modernizing, diversifying. Crude electoral maps and broad-brush political analysis can miss the granular complexity of America’s political geography, because so many people have added to their list of inalienable rights the right to defy stereotypes.

“The nature of the South is changing faster than the stereotypes are. Much of the South now looks like San Jose. Is it still southern?” asks John Shelton Reed, a retired professor of sociology at the University of North Carolina who has studied the cultural borders of the South.

So where is the border, professor?

“If I had to say, and I guess I do, I’d say just about the Rappahannock [River] when you’re going south,” he said. “When you get 50 miles from Washington, you’re probably in the South.”

Along the Carolina Road

Route 15 is the asphalt version of what was known long ago as the Carolina Road. The road crosses the Potomac at Point of Rocks, Md., and is just a two-lane country road when it reaches Lucketts, Va., in northern Loudoun County. Dominating the heart of Lucketts are a couple of antique stores, including Really Great Finds, where Carrie Sisk, 36, the retail manager, is a local and remembers when Loudoun County was just cow farms. She’s a Fox News fan, and her politics are more anti-Obama than pro-Mitt Romney.

“He’s so cocky. He thinks he’s Jesus. I don’t think he cares a whole lot about America,” she says of the president.

Keep heading south, past Leesburg with its outlet stores, and you’ll see the antebellum plantation Oatlands, where preservationists are fighting to keep housing developments out of its viewshed. Oatlands says “South,” but the eye is drawn beyond the old grain silo to the rack of new housing on the distant hillside.

Eventually you’ll see signs for the Winery at La Grange, which sits at the base of the Bull Run Mountains. Katie Lee, 29, taps on a laptop at an outdoor table, sipping a fine pinot gris. She’s an Obama voter. Co-worker Trish Davila, 45, doesn’t say how she’ll vote, but offers an unhappy observation: “People start to question other people’s patriotism if they don’t vote Republican.”

Onward to Warrenton, which is now a suburb of Washington.

“When I was a kid, Main Street was dirt,” says William Lawson, 75, a funeral director standing in the shade on Main. He says he’ll vote for Obama, and is unhappy with congressional inaction. “What they need to do is clear the House. Both houses. They’ve been in there too long.”

Tom Armstrong, 59, an arborist, pops out of the post office and says he remembers when this part of Virginia was rural and didn’t have many middle-class people, just the poor and the very rich. He likes the more multicultural feel of the area. He’ll vote for Romney, saying he doesn’t like the Democratic position on entitlements: “I really don’t think being a citizen of the United States entitles you to anything.”

Laurie Goddin, 62, of Alexandria, was meeting her friend Letitia Ord, 51, for lunch in downtown Warrenton. They didn’t realize how much of a political divide exists between them, because until this moment they hadn’t discussed the election.

“I think he needs more time.”

“That’s why we don’t talk politics.”

Below Warrenton on Route 15, the landscape starts to change. There are fewer housing developments, and fewer just-built mansions that look like they sprouted in a pasture after a recent rain. You’re nearing the Rappahannock, an unofficial border, and now you see vintage motels, what used to be called motor courts, and the occasional old house being eaten by vines. A truck stop has a big sign out front: “BBQ World.”

This is Quarles Truck Stop, where the manager is Donn Sachs, 63, a Tidewater Virginian who doesn’t feel he’s in the South when he’s this far north: “A lot of people don’t even know what grits are.” He’ll vote for Romney, largely on foreign policy grounds: “Stop apologizing for the U.S. and take a hard line on who’s our friends, and who are not.”

Just a little ways ahead, in the hamlet of Opal, a sign on the right says, “Clark Bros — Guns.”

It’s a gun shop with an outdoor shooting range in back. There’s a fiberglass bear, ferociously kitschy, on the roof.

“This is kind of where it starts,” says owner Steve Clark, and he’s referring, of course, to the South.

He’ll vote Romney and thinks Obama has done everything wrong: “He won’t admit that he’s a socialist, and that’s what he is.”

Ken Greene, a gunsmith, says of the president: “He’s trying to play Robin Hood. Take from the rich and give to the poor. And I’m tired of handouts. . . . Democracy’s supposed to be about survival of the fittest. Bailing out GM, bailing out this and that, it’s not good. Sink or swim.”

Now comes the Rappahannock River, which is shallow this far upstream. Last weekend some local African Americans reenacted an August 1862 flight to freedom, in which slaves crossed the river here to escape bondage and join retreating Union soldiers.

Ed Dudley, a Verizon employee, has parked a van on the northern side of the river so he can work on a line that leads to a water gauge in the river. He says he’ll probably vote for “the Constitutional guy” — former Virginia congressman Virgil Goode, who’s the presidential nominee for the Constitution Party. Romney’s really a liberal, he says. As for Obama, “Nicest guy I ever seen in the White House, but too dadgum liberal for me, too socialist. I want ’em out of my hair.”

In downtown Culpeper, you’re probably in the South, though you’re really not that far from Washington, which spews cultural seeds into distant pastures. Along the fault line you might think yourself deep in Dixie, only to see signs for yoga lessons and a wine bar.

Nora Lee, 47, a bail bondswoman in Culpeper, says she prays for a Republican victory. But she also finds it hard to talk to her more liberal friends about the election. She knows a man who can barely speak to his son, so divided are they by politics.

“This year’s really touchy,” she says. “It’s almost like a religious situation.”

Halfway to Orange is a vintage roadside store, the Midway Country Market. The proprietors are an African American couple who spent years teaching school in the District before relocating. Bob and Mary Royster, both 65, have packed their market with antiques, old tools, vintage glass bottles, furniture. You can buy pigs’ feet marinating in a jar, and pickled eggs. This is where you can buy souse — “head cheese.”

The Roysters will vote for Obama, but they’ll be judicious in talking politics with their customers. “It’s an ultraconservative area,” Bob Royster says. He says he doesn’t detect the kind of racism that existed in the past, though he says it’s not a good idea to “step on certain toes in the good ’ol boy network.”

Route 15 comes to Orange, where Jimmy Harris, 57, makes a purchase at a produce stand, and says he was a contractor until “the illegal immigrants put me out of business.” He’ll vote Romney, mostly because he considers Obama a catastrophe: “This country was founded on God, and he has gone the route of Sharia law, taking our rights away from us.”

Beyond Orange and past Dave Lamb’s horse farm is the town of Gordonsville, where Ken Garr, 52, a painter, will vote for Obama, because Romney “is for the wealthy people. He’s not for the middle class.” He remembers when the economy bottomed out four years ago and no one wanted to spend a nickel. Things really are better now than then, he says.

Eventually Route 15 hits Interstate 64. Just before the interstate there’s a new shopping plaza, with a Wal-Mart and a Lowe’s. The place calls itself “The Shoppes at Spring Creek” — the kind of spelling that makes a southerner suspect that someone’s taking on airs.

Beyond that is the village of Zion Crossroads. A man sells produce on the roadside. People trickle into the laundromat and the convenience store.

William Sprouse, 55, a logger and tree culler, says he’s undecided this fall. “I guess I’ll have to go with Obama, because Romney, I’m not sure what he brings to the table.”

He says of the locals, “Everyone’s conservative. They squeeze the dollar.”

Route 15 keeps going, of course, because remember, it was the Carolina Road. The conversation about where the South begins can safely come to an end at this point. People here know where they live.