Why is the South so Deadly? 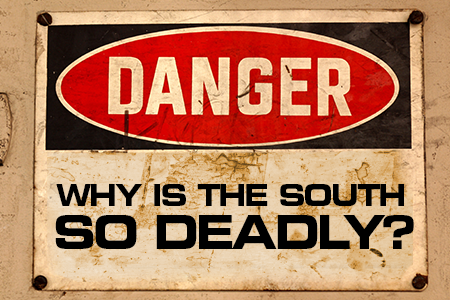 According to a Duke University sociologist, if the South were its own country, it would be the deadliest nation in the civilized world. As it stands, says Duke’s Kieran Healy (who has compared recent violence among nations as well as among regions within the USA) when it comes to the percentage of fatalities per assault, the American South is by far the deadliest region in the deadliest country among the world’s developed nations (http://www.kieranhealy.org/blog/archives/2012/07/20/america-is-a-violent-country/).

Why is the South is so preternaturally deadly? And is it equally deadly for all her citizens? Those are complex questions. Many have ventured guesses, from the casually speculative (the weather) to the academically articulated (an exaggerated notion of honor that predisposes Southern men to violence). Some have even suggested that the region’s famous hospitality is born from this awareness of danger. In other words, the argument goes, Southerners are more polite than other Americans because they well know the consequences if they aren’t.

While recent statistic may reveal accelerating trends in the still-new century, the record of violence in the South is not new at all. Efforts to explain the region’s proclivity for violence date back, in fact, to the origin of America itself.

One founding theory was recently reported by Whet Moser in his piece for Chicago magazine’s staff blog (http://www.chicagomag.com/Chicago-Magazine/The-312/July-2012/American-Violence-and-Southern-Culture/), Moser says some historical sources have floated the notion that the region’s insistence on physical violence as a means of settling disputes is a vestigial organ of British country culture, the traditions of which traveled with early settlers. In a new, unsettled country, they could not rely on the law or its agents to defend their lives, livestock and property.

Moser notes that works such as David Hackett Fischer’s Albion’s Seed: British Folkways in America, and Bertram Wyatt-Brown’s Southern Honor: Ethics and Behavior in the Old South, each address similar themes, “beginning with the idea that Southern ideas of justice and honor were imported from the lawless British borderlands, creating an ‘exceptionally violent world,’ in Hackett Fischer’s words,” Moser says. “’Backcountry proverbs did not glorify fighting for its own sake, but fighting for the sake of winning. Here was an ethic of violence which had been formed in ambuscades and border-raiding. It had nothing to do with combats of chivalry or the idea of war as a gentleman’s game.’

As Hackett Fischer notes, blood feuds and retributive justice were common in the British borderlands, and were imported into American culture, everywhere from the lands of the Hatfields and McCoys to Williamson County, Illinois (as described in Paul Angle’s brilliant Bloody Williamson, an account of the violence in that downstate, very Southern county). Southern law also treated property crime differently from violent crime:

‘Backcountry courts tended to punish property crimes with the utmost severity, but to be very lenient with crimes of personal violence. In Cumberland County, Virginia, during the eighteenth century, a court administered the following punishments: for hog stealing, death by hanging; for scolding, five shilling fine; for the rape of an eleven-year-old girl, one shilling fine. This structure of values continued for many generations in the backcountry. Historian Edward Ayers finds that in the southern upcountry during the nineteenth century, county courts “treated property offenders much more harshly than those accused of violence.’”

More recently, researchers at the University of Michigan attempted to answer the question of why Southerners are known for bursts ofphysical violence, which appear to be out of synch with the rest of the country and, for that matter, the world.

In the paper “Insult, Aggression and the Southern Culture of Honor, An Experimental Ethnography,” (http://mypages.valdosta.edu/mwhatley/7670/activity/honor.htm) published in the 1996 issue of the Journal of Personality and Social Pathology, doctors Dov Cohen, Richard Nisbett, Brian Bowdle and Norman Schwarz described an experiment conducted among students at the University of Michigan. One group grew up in the South, the other in the North.

Each student in the test was deliberately insulted by a fellow student (referred to in the study with no apparent irony as “a confederate.” Walking by, each participant was bumped into and called an “asshole.” Here is a summary of the findings:

“…Compared with northerners-who were relatively unaffected by the insult, southerners were (a) more likely to think their masculine reputation was threatened, (b) more upset (as shown by a rise in cortisol levels), (c) more physiologically primed for aggression (as shown by a rise in testosterone levels), (d) more cognitively primed for aggression, and (e) more likely to engage in aggressive and dominant behavior. Findings highlight the insult-aggression cycle in cultures of honor, in which insults diminish a man’s reputation and he tries to restore his status by aggressive or violent behavior.”

The study went on to describe “pre-bump and post-bump” measurements to gauge cortisol and testosterone levels in highly technical terms, concluding that northern students showed significantly smaller changes in those metrics than the southern students. Of course, many contributing factors are absent from the study. Were all their economic backgrounds the same? Were they happy people in general? Were the in a relationship or single? Were their parents together or divorced? Maybe Southerners are more likely to be on-edge when living in Michigan. And partly, the study simply proved what we have intuitively suspected: Southerners may be less likely to tolerate insults and rude behavior than other parts of the country where insults are hurled far more casually.

In assessing the level of deadly violence in the South, it is interesting to speculate about folk traditions, the culture of honor tracing to rural England and the vestiges of a time when our ancestors had to fend for themselves in dangerous places. But none of these theories account for what appears to be the prime driver of the South’s record of fatal violence, and that is: the disturbingly high rate of assaults leading to death in the African American community, not just in the South but all over the country. And of course, statistics in the South are more influenced by black-on-black violence because the region as a whole has a higher percentage of African-American citizens. The stark problem of black-on-black violence is made clear in the Duke study, which offers the following tragic assessment(http://www.kieranhealy.org/blog/archives/2012/07/21/assault-deaths-within-the-united-states/):

In view of the stunning and prolonged epidemic of fatal black-on-black violence, the lack of outrage in the African-American community and the lack of focus by the national news media is incomprehensible. By contrast, the national frenzy sparked by the interracial element of a single killing (Florida’s Trayvon Martin case) remains a depressing mystery as well as a sad example of misplaced priorities and our misdirected focus as a nation.

In 2009 alone, more blacks were murdered (6,556) here in the USA than all the American combat deaths to date in Iraq and Afghanistan combined. According to 2010 census data, African Americans constitute 13.1 percent of the country’s population (whites are 78.1 percent), and yet they account for roughly half of the nation’s murder victims. The overwhelming majority of these, according to the FBI (http://www.fbi.gov/about-us/cjis/ucr/crime-in-the-u.s/2010/crime-in-the-u.s.-2010/tables/10shrtbl06.xls), are murdered by other blacks. The numbers simply do not lie. In 2010, 2,270 blacks were murdered in America. Ninety percent of the murderers were black (2,459), with just 8 percent of those murderers (218) were white.

The South has the nation’s majority of black residents (55 percent, according to the U.S. Census Bureau) the majority of whom live in urban areas. The Great Migration of Southern rural blacks to urban centers in the North, which spanned from roughly 1910 to 1960, has reversed. According to a study by the Brookings Institute titled “The New Great Migration: Black Americans Return to the South” by author William Frey:

“This full-scale reversal of blacks’ ‘Great Migration’ north during the early part of the 20th century reflects the South’s economic growth and modernization, its improved race relations, and the longstanding cultural and kinship ties it holds for black families,” Frey writes. “This new pattern has augmented a sizeable and growing black middle class in the South’s major metropolitan areas.”

When it comes to the alarming rate of African-American deaths by violent assault in the South, the time has come to route out the myths. The dangers black Southerners or black visitors face in the region are not due to racism or the mythical legacy of the Klan, they are internal. Blaming white racists for the high rate of black deaths in the South is a lot like blaming Batman for the tragic movie theater shootings in Aurora, Colorado—both are fictions, nothing more than flickering images of myth and imagination.

Certainly the economics of poverty in the black community plays a role in answering the question of why the South is so deadly. But its exact contribution to the overall assault-death formula remains difficult to quantify because many large populations of concentrated ethnic poor in the South and elsewhere don’t exhibit the same levels of violence.

Vastly more significant, it would appear, is the need to understand the motivation and nature of violence in the black community and the role the ever-growing culture of violence, imported to the South from Northern urban centers, continues to play. Whatever the causes, remedies need to be sought. Ways need to be found to reverse those deadly trends and modify those cultural forces. But as long as we focus with a Pavlovian frenzy on the relatively rare cases of white on black violence and turn our gaze away from obvious data, we are not likely to find solutions to deadly violence as a region or as a nation.

So the fact remains: yes, death by assault is far more prevalent in the American South than in other regions and more prevalent in America at large than in the highly developed nations of the OECD. What we rarely focus on, however, is the fact that most violent deaths are generated by the black community against itself. And the problem is growing. Therefore the question is not: “Why is the South so deadly?” The bigger question is “Why does no one care?”